Yesterday I learned that Gracie is a bit of an attention slut and Tig is a Momma’s boy.

Since Meryl is out of town I offered to check in on her cats. We figured one visit on Monday would be sufficient since she’ll be returning Wednesday. As Meryl handed me the key she mentioned that Gracie likes me and that I might see her. Mind you every other time I’ve come over she has flitted by like a little white and orange ghost. Usually I’ve had children in tow on those visits, but I really didn’t expect to see much of her.

Shows you what I know.

After struggling to open the door with the new key for a good five minutes, I found Gracie front and center, loudly meowing and practically throwing herself at my feet. I even felt the briefest kiss of her sandpaper tongue on the top of my foot (I might have spilt something tasty on my foot, who knows.)

Tig, on the other hand, glared at me as if to say “What are you doing here? And where’s Mom.” 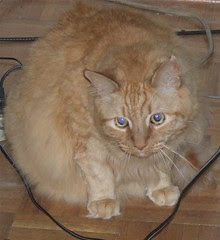 Tig
Originally uploaded by Teckelcar. He then scooted away and hid behind the chair. 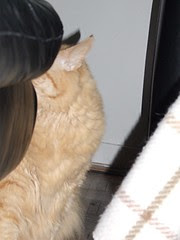 Tighides
Originally uploaded by Teckelcar. Gracie, meanwhile, perched herself on the “petting spot” begging for attention. 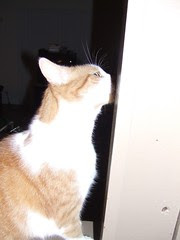 petGracie
Originally uploaded by Teckelcar. Here she is rubbing against the post and pleading with me to pet her NOW.
She even vocalized for me and I was able to capture a little bit on film.

She is such a cutie. I even got out the brush for her. She was deliriously happy when I stroked her short, shiny coat with the brush. I then searched for Tig to brush him, but he really wasn’t interested. After a few strokes he again retreated to behind the chair. I didn’t push it. He looked a bit peeved and I was pretty sure he would give me a nasty swat if I pursued him any further. I’m not his Mom nor am I an acceptable substitute.

After I checked out the place -water bowls full, vast quantities of food still available (but I skipped the litter box. I’m a good friend, but not that good) - I left Meryl’s. I made sure I could see that both cats were inside, then struggled to lock the door (new keys are soooo much fun) and headed back home.