Two Parties, a Trophy, a Cake and a Recital

Today was a very big day for Nate. This morning we headed down to the pool for a party for all of the tennis participants. There was pizza, t-shirts and trophies and I’m happy to report that the trophies are actually earned.

Nate was called up first and was presented with his trophy for winning the children’s division of the tennis tournament. Ben, the instructor had a nice thing to say about everybody and in Nate’s case it was somewhat funny.

“I remember when Nate’s Dad brought him down for his first lesson. He said “This is Nate; he has a lot of energy.” I nodded my head and thought nothing of it until I got to know Nate. He does have a lot of energy.”

It was said with a great deal of fondness. Nate does have boundless energy, but with that energy there is boundless enthusiasm. As a result, Nate is a lot of fun to teach and coach.

Nate then received his trophy and t-shirt and proceeded to bounce about for the rest of the party. 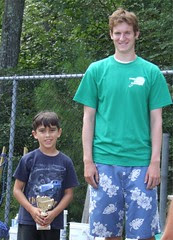 Nate&Ben
Originally uploaded by Teckelcar. Once we all had our fill of pizza and splashing about in the pool (or more accurately, I had my fill) we headed back home. Then I whipped up one of my orange cakes as per Nate’s request. Jake was miffed that I was not making a cheesecake. He has been bugging me to make one for the past couple of weeks. I then told him it was Nate’s recital and since Nate was performing and not him, Nate got to pick. Jake stopped his whine and said “You’ve got a point” and that was it.

Once the cake was done it was time for an *early* dinner (we are talking 4:00 pm). We had to leave the house by 4:45 to pick up Larry and get to the 6:00 recital. This particular recital featured original compositions written by the kids at the composition camp that Nate attended this week. It’s a week long affair that is held by Nate’s piano teacher. He had a good time last year so we enrolled him again this year. 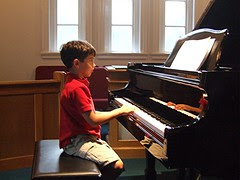 pianoNate
Originally uploaded by Teckelcar. He did a nice job at the recital; the kid does not lack confidence, even when he can’t keep a hold of his music.

I like “Torpedo” from last year more than “Laser Quest,” but I think the song has potential. If he spent less time running his fingers along the entire length of the keys it would be a better song.

Then it was home again. I’m looking forward to next week; from this point on we have minimal commitments until the start of school in September.
Posted by Sarah at 11:52 PM