Artist of the Week: Extreme Digging 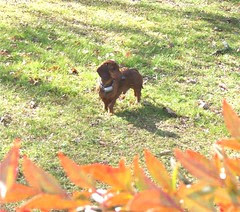 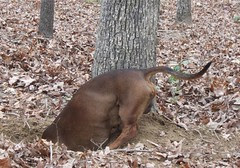 BottomsUp
Originally uploaded by Teckelcar.
John has been featured before for his digging prowess, but last week he really outdid himself.

He was, thankfully, out in woods when he was possessed by an extreme urge to dig. I noticed it early afternoon and thought nothing of it. A few hours later, when the boys came home from school, he was still at it. We were all astounded by the hole he was digging.

As you can see here his forequarters are completely encompassed by the hole, leaving only his hind end hanging out. The hole itself about 13 inches deep. According to this site, if he were to keep on digging he would end up in the Indian Ocean, off the western coast of Australia.

While he was digging I also shot some video footage of him in action. During the first third of the film I’m on the phone with a friend and that is who I’m talking to.

This was just too funny not to share.
Posted by Sarah at 3:29 PM