Crunch has become a lumpy old dog. Most of them are lipomas (fatty tumors), but one on his chest bothered me. So on Thursday I took him to the vet to get it checked out.

Crunch is always a big hit at the clinic. He is a friendly dog that is happy to be there with a tail that doesn’t stop wagging. He whines in the waiting room, eager to go in back and visit his friends. The techs fuss over him and always compliment me on his fit and trim physique. I take pride in the fact that I haven’t gotten the fat dog speech.

The vet checked him and promptly found a lump that he didn’t like one bit. It wasn’t the lump I found, but next to it- in his armpit (front legpit, whatever you call a dog’s armpit). After lots of squeezing and messing about with the lump we decided that it needed to come out. The vet gave Crunch’s heart a good listen and declared him fit for surgery. The only tricky part was the pre-anesthetic blood draw. It took three tries on Crunch’s short boney legs until the vet was able to get a good draw. All that was left to do was for me to pick when and I decided the next day, Friday.

Friday morning I dropped him off, went home and waited.

Four hours later the clinic called. Mr. Crunch was fine and in recovery. The lump in question was indeed a lipoma as well as the neighboring one (the one I found). Both lumps were removed and I should give a call around 3:00 to see how he’s doing. 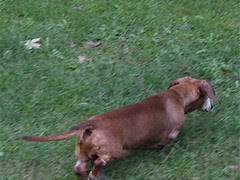 Crunch
Originally uploaded by Teckelcar.
At 4:30 Crunch was still out of it and was deemed not fit to go home. I did press them and they were willing to release him. But, I then realized I had John at home, an amped up three year old that has been denied his wrestling partner. Maybe having an unsteady dog with fresh stitches brought into the house wasn’t such a good idea. So Crunch got to spend a quiet night at the clinic.

Saturday morning Crunch came home, hale and hearty. He hasn’t missed a beat since. I’m just happy to have my healthy old boy back.
Posted by Sarah at 11:47 PM