Artist of the Week: Photography 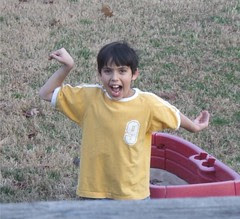 Jake
Originally uploaded by Teckelcar.
I took this picture of him in January, can’t you tell? Today was colder than that particular week in January. And it was also colder when he took this photograph in February. 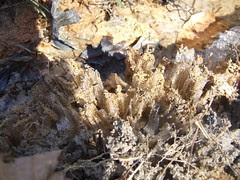 crystals
Originally uploaded by Teckelcar.
If you click through the photo it will direct you to the whole set.

He was out by our stream when he noticed the ice crystals in the mud. He ran back to the house to tell me and I sent him out with my camera with the firm admonishment to keep the wrist strap on his wrist. At age ten, I feel that he is responsible enough to take care of my camera without direct supervision.

His first set of pictures did not turn out particularly well. He was frustrated by how blurry they were, he wanted close up pictures with fine details. When he came inside and told me of his disappointment I then showed him the macro feature of the camera and told him this was the ideal situation for it. He dashed back outside and was able get some lovely shots.

He was struck by the beauty of the ice crystals emerging from the mud. He thinks that the area froze and as the ground thawed some of the mud washed away exposing the miniature pillars of ice thrusting up out of the muck. I completely agree with him and I think he has a very good eye.
Posted by Sarah at 9:56 PM