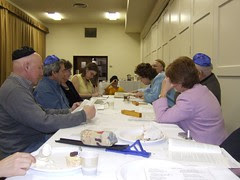 BaseballPlayer
Originally uploaded by Teckelcar.
Last night we headed over to Temple for Purim. I love the whole atmosphere; for once my children can be noisy, in fact they are even encouraged. It was a small crowd this year, but a very warm one. The Rabbi was in rare form and it was one of the funniest Megillah readings I’ve ever heard.

As usual the kids all dressed up. Nate had baseball practice (which actually occurred as opposed to last year) and stuck with his baseball uniform.


Once again Rebecca was royalty. She portrayed Queen Esther and got to wear her Cinderella dress with matching shoes, scepter and crown.

Jake, on the other hand, was truly inspired this year. He decided he was going to be Darth Haman, all he needed was a tricorne hat. We headed out Saturday afternoon to pick one up at our local party supply store. I figured with the popularity of Pirates of the Caribbean I should be able to find a pirate hat. Sadly they were out of the fancy version, but they did have a cheap plastic one for children. I peeled off the skull and crossbones sticker and he was good to go. He wore the hat with his Darth Vader costume sans mask and the final result was quite good. 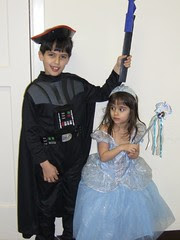 Darth Haman & Queen Esther
Originally uploaded by Teckelcar.
In this picture Queen Esther looks a bit distressed being near the combined evilness of Haman and Darth Vader.

While we were at the party store Max admired a crown in the Mardi Gras section and decided he would be the king. Of course nothing is simple with Max and he had to refuse at least one part of his costume. He happily wore his crown, dress shirt and pants, but he balked at the cape. 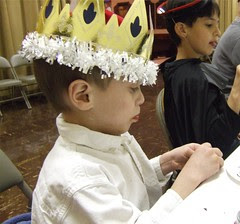 And as usual, halfway through the evening he changed his mind. 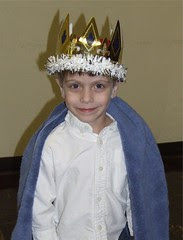 The King
Originally uploaded by Teckelcar.
Of course the service wouldn’t be complete without graggers. 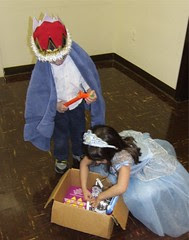 King & Queen
Originally uploaded by Teckelcar.
The dynamic duo carefully selected their weapons and proceeded to have a gragger battle. 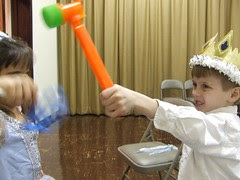