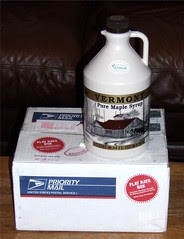 maplesyrup
Originally uploaded by Teckelcar.
Today I got my latest shipment of maple syrup, fresh from the sugaring house.

The boys were delighted when they found the package in the mailbox.

I admit it; I am a maple syrup snob. I get mine directly from a small sugar house in Vermont. As is true with most producers of Vermont’s most renowned product, sugaring is just a sideline. Right now he is in the midst of sugaring season, but the rest of the year he is just Wayne the builder. I got his name from my mother under recommendation from a friend of hers.

I love calling them up and ordering my customary half gallon; we chat for a bit, I place my order and 4 days later the syrup appears at my door. I don’t even get billed until after I receive the stuff and it is a far better value than what I can get locally in the supermarket. Even with the added expense of shipping.

I myself don’t use it very often, but I do appreciate the difference. I have bought generic “Vermont Maple syrup,” but I’ll never get the fake stuff.
Posted by Sarah at 11:07 PM