Nine years ago today I got to meet this guy for the first time.

babyjake
Originally uploaded by Teckelcar.
On a Friday, two weeks before his official due date, I had gone to work like any other weekday. Larry had driven us in that morning and had dropped me off. Our respective buildings were close together, but it was a bit of a hike to our parking lot. Normally we would take turns being dropped off, but as the due date grew closer Larry insisted that I should be driven to and from work. He got no argument from me! My water broke shortly after I got to work, but there were no contractions. I called up my doctor and she told me to come in when contractions started in earnest or by 5:00 pm, whichever came first. Since nothing was happening in the contraction department I decided to stay at work. I then phoned Larry and told him the exciting news.

At the time I was working in a research lab at the University of Wisconsin, Madison. The running joke was that there was always at least one pregnant person associated with the lab. We were a close knit group and would regularly socialize outside the lab. It was a very friendly and supportive place to work, a perfect place for me to be that day. I had a few things to finish up and I could clear my desk out. Larry at the time was All But Dissertation with his PhD and would be starting his new job at the end of August. We were moving in 6 weeks and I would stop working with the birth of our child. It was a very bittersweet day for me. I was going to miss all my friends from work, but I was going to have a baby. I remember calling up Larry sometime after 4:00 pm and telling him I would be ready to go in half an hour. I still wasn’t having any contractions.

I packed up my things in a box and bid good bye to my coworkers. Paul, one of the postdocs, followed me downstairs, carrying my box. He waited at the curb with me for Larry’s arrival. We chatted about his son Ben who had been born just a few months ago. Ben was a very challenging baby. He was colicky and demanding. I hoped my baby wouldn’t be as hard. When Larry arrived Paul turned to me and said that this was probably it, this would be the last time he would be seeing me at work. He gave me a hug and we said good bye. The hospital was a short drive from there. Larry parked the car and together we walked to the maternity ward. I was duly admitted and put in a birthing room. I still was not having any contractions.

The nurses informed me that if I didn’t start having contractions soon I was going to be induced. They suggested that I walk around. I ended up hiking all over the place. I got bored of the maternity ward and ended up going up the stairs to the orthopedic floor. I must have been quite a sight, a very pregnant woman marching about the hospital with her husband trailing behind. Finally, I started to have some contractions.

My contractions, however, were not very regular and they were concerned about the baby’s heart tones. In the end I was induced. It didn’t take much and just after midnight I had a seven pound, eleven ounce boy. Turns out he had a true knot in his cord. That is why his heart tones kept dropping as much as they did. He was none the worse for the wear and we were all very happy to be together. As I like to say, he was a very good boy and listened to his mother. I had been asking all along while I was pregnant that the he should be 7 ½ pounds. He was two weeks early so he could grant my wish. 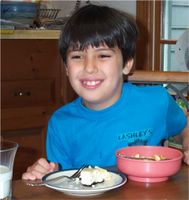 He is enjoying some birthday cheesecake with his breakfast. Our family tradition is that you get to have cake for breakfast on your birthday. Grandma and Grandpa had visited this weekend and we had a little family party for Jake. He loves cheesecake and wanted one for his birthday. I made one for the family party, but I’ll make an orange cake for his sleepover. Not everyone likes cheesecake, so I thought it was best to have it with his grandparents. Later today his two best friends, Kyle and Jack will be coming over. We will have pizza and cake. Then afterwards, Larry will take them bowling. It should be great fun.
Posted by Sarah at 9:05 AM