Here are some more pictures from trip to the zoo on Monday.

I’m posting this one for Meryl. She has several pictures of Tig that are very reminiscent of this.

I love the lioness’s pose. You *almost* want to jump over the guard rail, run down the embankment and reach through the fence to give her a tummy rub. At that point she would wake up and rip your arm off.

As we walked through the exhibits we noticed that this spring had been very fruitful for the zoo. There were many new additions, some cute and some not so cute. I only took pictures of the cute ones. Baby sloths are even uglier than their parents.

In the field neighboring the giraffes we noticed a zebra foal grazing with its mother. While taking the photo I noticed some peacocks with chicks along the far fence line. The zoo has a large flock of peacocks that are free to roam about the grounds. The males are quite spectacular, but the peahens are usually a mottled white with brown flecks. 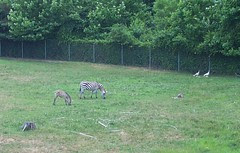 According to this web site they might be the India Blue Blackshoulder variety of peacock. I’m not really sure about this, but it does explain the colors we see.

Then it was on to feed the giraffes which is the high point of our zoo visits. After we fed the main herd we noticed that there were some more giraffes that had been separated out and corralled over by the barn. It turns out they were two momma giraffes with their offspring.

The mothers were all over us for treats. There was very little to browse in their corral and I suspect they were very bored. The little ones were very shy and remained at the far side of the pen. The standing one has lowered its head so it only looks like it has a short neck. The one with its legs folded under looks kind of like the baby giraffe from this poster.

Hopefully we’ll have another coolish day this summer so we can see how all the new additions are growing.