Today is the grower’s market at the 17th street farmer’s market in downtown Richmond and it’s Twinsday!

It was already over 80 when we made our way up to Richmond. I threw a cooler with blue ice into the back of the van before we left home. Our plan was to pick up our garden share and then go cross town to meet Meryl for lunch. The van would become an oven while we lunched and I didn’t want my veggies to get cooked.

Parking was not too bad up in Richmond. I found a quasi-legal spot right along side the market. We ended up right next to the children’s activity area. This is a new feature this year and it is proving to be quite a hit. The market is boarded by four streets and is composed of a long rectangle that is a series of squares with an awning along the edges. The central core of each square is an open area with most of the venders facing inwards. Max and Rebecca immediately wanted to play. They tugged on my arms, but they relented when I said that we need to get our shopping done first. The promise of our then having lunch with Aunt Meryl sealed the deal. They willingly marched along with me.

We went to Amy first and picked up our share. Included this week were some luscious strawberries. We of course had to sample some right away. Strawberries in hand we made our way back. As we reached the square that contained the children’s area I spied the handbag lady. I needed a new bag so I sent Max and Rebecca to go play. I could easily shop and keep an eye on them at the same time. Max was happy with the ring toss, but Rebecca quickly grew bored and came over to shop with me. After I was finished buying my new bag I took Rebecca’s hand and went to collect Max. At this point we noticed the art supplies. I gave each a piece of paper and showed then the markers. They busily squatted down and went to work. Once they deemed that their pictures were done we went to the van and loaded up. 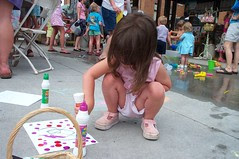 Rebecca was getting a bit cranky from the heat. She does not tolerate heat at all. I’m sorry to say that she gets this from me. I feel like dissolving into a little puddle misery in the summer. The difference between me and Rebecca is that I have greater resources than her to cope with the heat. After some intense whining she perked up once the van AC kicked in. I called Meryl to tell her we were on our way. She would be meeting us for a quick lunch.

Meryl beat us by two minutes. She called me on my cell just as I was parking the van. Once inside we ordered and settled down for our lunch. Initially there was some controversy over the seating arrangements. I ended up being sandwiched by Max and Rebecca on one side of the table. We tried to persuade Rebecca to move, but she wouldn’t. Meryl than hit upon the idea that maybe she just wanted to be on that particular side of the table. So then Meryl and I switched sides. It worked, Max tagged along with me and Rebecca stayed put.

After a longish wait our order was up. Meryl’s was all wrong and she ended up sending it back. The rest of the food was fine so we could at least get the more restive members of our party fed. I won’t go into much more detail here other than to tell of Rebecca’s latest disgusting habit. She now wipes her hands on her hair. I warned Meryl of this new development earlier in the week. Rebecca had a peanut butter and jelly sandwich that was very messy. She picked up her sandwich took a bite and then noticed the sticky mess on her hands. Before we could stop her she was happily rubbing her hands on her head. Meryl got some napkins and gave her one. Rebecca politely accepted it and then proceeded to rub it all over her now sticky head. It was very funny and both Meryl and I took pictures. Mine didn’t come out, but Meryl got one really nice shot. I never thought I would wish that a child of mine would wipe its hands on its shirt.
Posted by Sarah at 3:24 PM