There be Sharks Out There

I’ve been following the news this year about the sharks off the coast of Florida. I have seen some spectacular footage (click on the image in the second link to get the full picture) of large numbers of sharks schooling off the coast. It has been an unusual year in that the sharks are closer to shore and are clearly visible. Deerfield Beach was one of the areas affected and we have been there several times. It is near where Larry’s Grandmother used to live. We would go down and see her during spring break, but this isn’t what recently caught my attention.

Yesterday at AMCGLTD I read about the shark attack that occurred off the shore of Cape San Blas. The story was also mentioned on the local news last night, but they did not specify where it had occurred in the gulf.

The only reason this caught my attention was that we vacationed there last year. 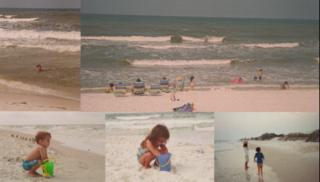 We shared a duplex with some good friends. Their three children get along with our four. They have a boy, Joseph (the oldest), and two girls, Rebecca and Elizabeth. I think Joseph enjoys being with our rowdy male trio and our Rebecca was fascinated by the youngest girl, Elizabeth. Meanwhile Elizabeth liked being an older girl for a change and not just the baby. Their Rebecca seemed to get along with all. Our days were spent in and out of the water.

It is one of the few wild areas left in Florida. Cape San Blas is a narrow peninsula in the Gulf of Mexico off of the Florida pan handle. It has sugar sand beaches and sea turtles build their nests along the Gulf side. In nearby Apalachicola you can get the freshest oysters, right from Apalachicola bay. The water was clear and warm when we were there in August.

At this point there is very little commercial development, just endless sand, dunes, a few mom and pop stores, rental offices and vacation homes. The boy that was attacked was very lucky to survive. The closest medical center is tiny and is a good half hour from the Cape San Blas itself. I’m sure it was just a case of stabilizing the boy and waiting for the helicopter.
Posted by Sarah at 4:29 PM