To the Zoo Again

Today we went to the zoo. The forecast was for mid-to-low 70’s and partly sunny, perfect zoo weather.

Like last time, we bought two containers of zoo treats and split them between four paper lunch bags. We then headed on down to the aviary. All four kids love to see and feed the ducks contained within. It is a lovely spot with streams of water coursing about, little pools doting the enclosure and a waterfall at the top. Normally it is very serene within, but not today. Instead, we were treated with the food chain in action.

As I stood there watching my children dart about I noticed an Ibis in the lower pool. It had just nabbed something and was tossing its head back to eat it. My first impression was a fish. I thought how neat it was that there were fish for the Ibis to catch and eat. Then I realized to my horror it was a tiny duckling, an oh-my-gosh-it-is-not-even-a-week-old duckling. I watched mute with shock as the Ibis choked down the squeaking bundle of feathers. At this point my children noticed as well as the other zoo patrons. When the show was over I came to my senses and attempted to herd my children out, then another Ibis struck. This was too much. Jake turned to me and said that we had to do something. As the second Ibis ate I shooed it away from the ducks. All three flew to the overhead perch. badbird
Originally uploaded by Teckelcar.
I looked about and realized that nobody was going to do anything. All the adults were standing there with expressions ranging from horror to disgust. It was up to us to find a zoo-keeper and stop the slaughter. There were four ducklings left, but not for much longer. We marched out of the aviary back to the entrance. I ducked into the gift shop and told them that the aviary was quite gruesome right now and quickly outlined the events we had just witnessed. The staff promptly radioed for help. The kids and I all agreed that we should go back to the aviary and try to protect what was left. 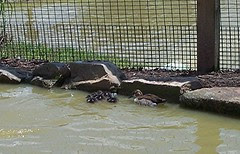 fourducklings
Originally uploaded by Teckelcar.
The four ducklings were still there. Momma duck was frantic and was chasing all the other ducks away from her shrinking brood. Unfortunately she was no match for the Ibis and they were coming back for more. At this point the son of one of the keepers showed up. He stepped into the roped off area and kept the Ibis at bay. Just as we about to leave the aviary a keeper arrived with a large cardboard box. She shucked off her shoes and socks and stepped into the water.

Here she is putting the ducklings into the box. 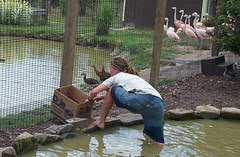 ducklingrescue
Originally uploaded by Teckelcar.
When she was done the zookeeper thanked us for reporting the carnage and took the ducklings to a safer location.

Secure in the knowledge of the remaining ducklings’ safety, we continued on with our visit.
We saw all of the remaining exhibits mostly without incident. I’ll post some more pictures later, but I have to share this last photo now. 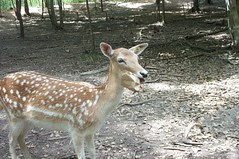 The bad deer once again earned their name. Some of the Fallow deer were standing near the fence. They gently nibbled treats out of Jake’s hand. Rebecca then held out her treat bag to a doe. The doe ripped the bag out of Rebecca’s hand, dumped the zoo treats on the ground and then proceeded to eat the bag. Rebecca stood there in stunned silence. Max promptly piped up “Bad Deer!”