So why did I take two tablecloths, three cakes, four kids and $400 worth of dog toys to the dog show? Because I had to.

Saturday was my dachshund club’s specialty show (A specialty is a dog show dedicated to one breed in this case dachshunds. My club’s show is held with an all-breed show so all it really means is that the winners get nicer trophies than the other breeds at the show). I am one of the club’s officers and I am obligated to show up. In addition I was also on the trophy committee. I had ordered the trophies two weeks ago and had them delivered to my house. Thursday night I labeled the trophies and made tickets that the winners would use to claim them. And finally, I had volunteered to bake some cakes for the luncheon after the show. Originally I was also going to show our dog John, but I procrastinated sending in my entry and missed the deadline. 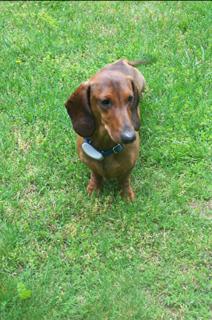 Entries close on the Wednesday at noon two weeks before the show, I remembered on Wednesday at 4:00 pm. Ooops!

It turns out it was to my advantage to miss sending in the entry. I had been planning on going to the show for about eight months. Last March Larry got elected to a board and it turned out he would have to go to a meeting up in Baltimore on the same weekend as the show. Noooo! I would have to deal with all four kids at the show, by myself. Then I remembered that Meryl had mentioned she would be interested in going to a dog show sometime. So I asked her if she wanted to help me out. She agreed and I was all set. Unfortunately, life intervened and she had to go to New Jersey for a funeral. It was back to just me and the kids. As an added bonus some nut called the show superintendent and had them schedule dachshunds first thing in the morning (i.e. 8:00 am). In order to make it on time I’d have to leave the house at about 6:50 am. With. Four. Kids.

Well I’m never above a little bribery with my children to make my life easier. On Thursday I promised them after we dropped off the trophies we would go to McDonalds for breakfast. This bribe was enthusiastically received; the promise of pancakes was enough to buy their cooperation. Friday I touched base with the club’s luncheon organizer. I couldn’t remember if I promised to make two cakes or three. Alan sounded distant on the phone and confirmed it was two cakes. He thanked me in advance and then launched into the saga of his failed cake. It had stuck to the pan and he could only get it out in chunks. He didn’t know what to do with it. At that point I volunteered to make another cake. As y’all know by now I like to bake. I decided I would make one orange cake with an orange glaze, my basic 1-2-3 cake with chocolate icing and a flourless chocolate tort. I have made each of these cakes many times and I knew that they would turn out well.


That night the cake baking went without incident. The kids all went to bed without any protest, the promise of clown food worked its magic. Even I got to bed at a reasonable hour! I set the alarm for 5:30 am and I had everything ready to go. The cakes were safely tucked in the fridge, the trophies were boxed up and two tablecloths were pulled out and placed with the trophies. I was only going to bring one for the trophy table, but after having the club president asked me to be sure bring one, I thought it would be prudent to bring two.

The morning went without a hitch. Even the dogs cooperated. I didn’t have chase anyone down or pull them out of the woods. They pottied outside and happily went back to their crates. We were all loaded up and out by 6:50. At the last minute I tossed in a packaged set of paper napkins, paper plates and a disposable tablecloth into the back of the van.

We got to the show site at about a quarter to eight. The usual pre-start chaos was in full force I dropped off the trophies at ringside, pointed out the tablecloths and told them I would be back after I fed my children (and myself!) breakfast. I then gave the ring steward the trophy tickets and headed on out. We piled back into the van and made a beeline for the McDonalds that was a half a mile back. Once inside I came to the awful realization that I had no cash and the credit card readers were on the fritz.

I then had the joy of herding two sobbing three year olds back to the van to get some cash. The older two understood the situation and buckled back up without a complaint. As I sat in the car trying to decide where to go I noticed the gas station across the street had an ATM. Hooray! I could get money there. It wasn’t my bank, but I was willing to pay the alien ATM surcharge to avoid endlessly casting about for my bank. We zipped on over and I dashed inside to get my cash. Boy did it stink inside. It was horrid combination of unwashed bodies and stale cigarette smoke. Trying not to breath I completed my transaction as quickly as possible. I grabbed my cash and receipt and popped back into the van. I drove back across the street and herded my brood back inside. They all got pancakes with sausage and were very happy.

The rest of the morning went well. I ended up looking very competent and reliable. There were a couple of meltdowns by club members during the show about trophies, but we got it sorted out in the end. My children were reasonably well behaved and my cakes were very popular. The only reason that I took back home two slices of cake was that I scooped them up before anyone else did. Oh, and remember the paper goods and the tablecloths, we ended up using all of them. The person in charge of the table linens forgot or was unable to bring them and we ran out of paper plates and had to break into my spare stash.
Posted by Sarah at 11:45 PM