Dachshunds Are Not For The Squeamish

Our backyard is filled with all sorts of creatures and some of them are quite delicious according to the dogs.

This morning John was very agitated when he was outside. I had just fed the dogs and put them out; it was not quite 7 o’clock. John was barking, pacing and tracking some critter. Basically, he was being a noisy pain in the neck. When I went out to investigate he became emboldened and cautiously pushed forward on the scent line. When he rounded the corner he charged barking across the front yard. Then he looped back to a spot under the bushes and nosed something.

It was a chipmunk. I don’t think John was responsible for its demise. It is much more likely that a cat had done the deed. My best guess is that John, with me as an unknowing back up, had chased off the cat. I never saw it, but his behavior fits the scenario.

As I stood there, barefoot and in my pajamas, blearily contemplating the chipmunk, John made his move. He snatched up the little corpse and took off at a high rate of speed. I made a token lunge at him, but I really did not want to deal with this mess. Instead I rounded up the other two dogs and headed inside. I’d deal with John later. 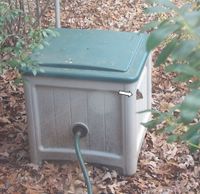 Another chipmunk at a happier time.

In the five years we have lived here the dogs have nailed (to my knowledge) at least one snake, a turtle, a frog, two moles and two opossums. The turtle was the most bizarre and the snake was the funniest. We had invited a family over for dinner. Their boys play well with our older two. Shortly before they were due to arrive Larry had just finished neatening up the yard. As he passed by the front steps he found half of a good sized snake laid out on the steps. He quickly disposed of the remains. The funny part was that our friends are vegans (the non-militant type). They are very reasonable and don’t object when people eat meat around them. They even set up a meat-eater’s grill when they have a party at their house. A dead snake laid out on the front lawn, however, would be a bit much.

I always tell people that dachshunds are a self motivated vermin eradication system and my three dogs are living proof.
Posted by Sarah at 12:08 PM