Sunday afternoon Jake and Nate had their spring piano recital. In all likelihood it will be Jake’s last one. He has been taking lessons for a little over four years. For the past two years it has been a battle to get him to practice. When he settles down and concentrates he is quite good. He readily picks up new concepts and has an innate sense of what to do. But sadly it has become harder and harder to get him to do anything. He has been just coasting along on his natural talent. Maybe in a few years he’ll pick it up again. We have at least given him a good foundation. Anyhoo, back to the recital.

Their teacher has her students perform twice a year. Fortunately she schedules two time slots, so that we don’t have to sit there for over three hours. It usually works out to be an hour and half of performance per session followed by a little party with treats brought in by all the families. We are usually scheduled for the later slot. At the end of the spring recital trophies and certificates are handed out. To receive a trophy a student has to memorize pieces of music and successfully perform them for a Judge. There are three different sized trophies, with the size of the trophy indicting the level of accomplishment. For a small trophy you have to memorize six pieces of music, for the medium eight pieces are memorized and for the large ten. If one of your selections is particularly long and/or difficult for your skill level it can count as two. They get evaluated and if they do a decent job they will earn a trophy.

Generally most do get a trophy, but the teacher told me of how on one occasion the student got too cocky and obviously had not practiced and completely failed to perform any of his pieces. I like that the students have to accomplish something to earn their trophy. The boys have a number of what I call participation trophies from the various recreational teams they have been on. Every kid on the team gets the same trophy. The boys like getting them, but I find them to be meaningless. I’d rather skip the trophy and give out t-shirts instead. The teammates could do something fun like autograph each others shirts at the end of the season party.

This year Nate earned a large trophy and Jake a small one. 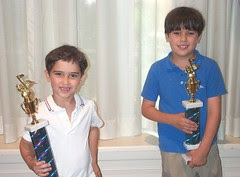 During the recital both boys did a very good job. I, on the other hand, did a poor job of taping their performances. I started late because I had to first remove a small person from my lap before I could get up. Then I fumbled around to get the camera. At least I had remembered to bring the camera and recharge the battery ahead of time.

As the recital went on the room got hotter and hotter. Programs were being used as impromptu fans. It wasn’t until the very end that I felt a hint of the AC. While chatting with my neighbor at the bus stop this morning I found out that the earlier session had been down right chilly. I guessed the AC had been turned off. I wasn’t too surprised since the performance hall is at an old folk’s home. I had even dressed my children for the possibility of it being very warm in the hall. During the fall recital I’ll insist on a long sleeve dress shirt and nice pants. Usually it is late fall and the hall will be set at a reasonable temperature. I’m a little more flexible with dress for the spring session as it is usually heating up outside and inside. I have clear memories of visiting elderly relatives in their overheated (to me) homes. It was a relief when the performances ended. Poor little Max was a hot and sweaty mess in my lap. He kept asking if it was time to go.

I noticed while the trophies were being handed out that generally the younger children earned the larger trophies. All of the older students had small to medium trophies. This makes sense, since her older students are performing at a much higher level and there is only some much you can memorize. It is not easy to memorize and perform multiple pieces of new music each year.