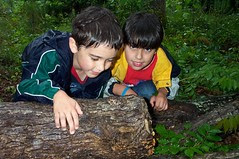 As I wrote below we have a large number of critters in our backyard. Toads are one of the few that are deemed inedible; heaven knows the dogs keep on trying. It is actually very funny whenever Crunch gives it a go. He lunges towards the toad with jaws agape. He then snatches up the toad and for the briefest moment holds it in his mouth. Then it’s ptui, out goes the toad. He’ll then bark, lunge and snap at the poor thing until I either relocate the toad or haul him inside. Small flecks of foam, a reaction from the toxins secreted from the toad’s skin, fly from his jaws. The toad usually just hunkers down and does its best impersonation of a stone. When I separate Crunch from his would be prey he seems almost relieved that it is over. His prey drive is much too strong for him to break off the attack, but you can see his heart is not in it. The toad is usually no worse for wear after its encounter with Crunch.

I’m glad that the dogs are not eating the toads. I would probably have to haul them to the vet if they did. Mouthing an occasional toad is fine, but eating one could make a dog very ill. I also appreciate all the good toads do. They are little bug eating machines.

Nate and Jake love finding all the toads on our property. Nate gets very attached to them and usually names them Sammy. He tenderly picks them up and cradles them in his hand. The nice thing about the toads is that they generally just sit in his hand. Frogs are much more active and are always trying to leap away. He claims it’s always the same toad, but I don’t think so. There are a large number of them hopping about.

Just last weekend, while out playing in the rain, they caught one. They decided to put the toad on a log with two slugs. Then they burst into the kitchen to tell me and dragged me out with camera in hand.

I can only see one slug in the picture, but at one point there were two on the log.

I love how my children can play outside and explore in our little woods. I remember spending all day outside when I was young. My first home was on a dirt road where we were the only year round residents. Later we moved to a more populated area, but I had over twenty acres of fields and woods to roam. For me, it was idyllic.