Today I took Max and Rebecca on a little field trip to our local Krispy Kreme. Papa Possum had kindly alerted his readers that it today is National Doughnut Day. I felt that it was as good an excuse as any another to go, but first we had to go to the dump.

I could have a trash service come and haul my garbage away, but what’s the fun in that? Instead for a much smaller fee I can haul my own. My local dump, or rather, transfer station, has a nice setup. There is an embankment that you drive up. At the top there are numerous trash bays. The bays have a shear drop off and an enormous dumpster is positioned at each one so that you drop your garbage down into the dumpster. I like that I get to decide when it’s time, I get the satisfaction of hurling it out of the van and into the dumpster and I also get rid of all our cardboard (at the dump you only have to flatten it, curbside recycling requires that you cut it down). I once got video taped at the dump while I was recycling my cardboard. It was for some sort of county training film. I was the good recycler, a rather odd 15 minutes of fame. Once our dump duties were completed it was off to the Krispy Kreme.

It is a bit of a drive to get there. Throughout the drive I would be asked what direction is the doughnut store. I would point in the approximate area and then my co-pilots would tell me that I would need to turn that way. Max and Rebecca are dedicated backseat drivers. They very often have a firm view on where we should go. Some times when I have ignored their directions, all hell breaks loose in the back. Both of them at various times have been reduced to tears when I have gone the “wrong way.” Thankfully they are outgrowing this stage. They are slowly coming to the realization that I usually have a very good idea of where we are and that they should be listening to me.

When we could finally see the sign, both of them shouted out “I found it!” I happily noted that the Hot Light was on. I parked and then herded Max and Rebecca into the shop. It was not too busy so we were able to place our order and yes we got some free doughnuts. We had to order first then I was told that we would also get three free samples. The kids ordered chocolate iced with sprinkles and I got two original glazed right off of the belt. Mmmm, hot fresh doughnuts! Our free doughnuts were a glazed sour cream (cake type), a cruller and a cinnamon roll. We then picked up our drinks (orange juice for Max and milk for me and Rebecca) and paid up.

At the table Max announced that he did not want the one with sprinkles. I had anticipated this and gave him an original glazed instead. I then poured out some milk for Rebecca and some juice for Max. This time I remembered to bring lidded cups and straws, so I could limit the amount of drink spillage.

Rebecca inhaled her doughnut. Max picked at his and drank his juice. In the end he sampled a few others, but never really ate any one particular doughnut. He even had me pick off some of the glaze at one point. He at least drank all of the juice. Rebecca not only finished her doughnut she also had half a cinnamon roll. I enjoyed my doughnut and the rest of the milk. While we were eating Max and Rebecca noticed that other kids had hats. They wanted hats too. Sadly they had just run out. Max then solemnly announced that “They need to buy more.” We did find one after we were done with our doughnuts. Max cheerfully donned his hat and we then watched the doughnut making machine. 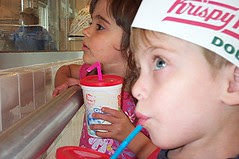 I love watching the machine at work. It is fun watching the little blobs of dough grow in size, cook on one side, be flipped over to cook the other side and then be glazed. Today seemed to be mutant doughnut day. I have never before seen so many misshapen doughnuts. You can seem them in the picture above. They are just about to go through the glaze waterfall. In the short time that we were watching I easily saw a dozen malformed and half cooked specimens go down the line. I noticed a large box was under the conveyer belt and it was 1/3 filled with mistakes. I wonder what happens to them. There are only so much that the staff can eat. I guess they get tossed. I took a few pictures of the kids and the doughnuts and then we were done. The drive home was uneventful, about halfway home they both conked out. A good thing to do on National Doughnut Day.
Posted by Sarah at 1:54 PM