Artist of The Week: Crown

As I mentioned over a week ago Max decided he wanted a crown. Of course this was after we got to temple and it was too late to do anything about it. However we still had the crown I had cut out and the next day he decorated it. 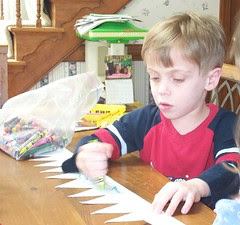 Maxcrown
Originally uploaded by Teckelcar. And then he wore it. 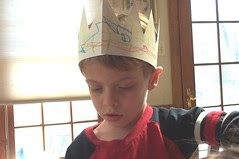 kingMax
Originally uploaded by Teckelcar. He was very intense while he colored his creation. Art is serious business. He carefully drew a pair of green parallel lines around the circumference and then added orange and red. Then each point got a yellow scribble. The front of the crown got an abstract blue scribble and then he was done. The overall affect is quite pleasing to the eye. He is very proud of it and rightly so. Rebecca keeps trying to sneak off with it, but we are on to her. She’ll just have to be satisfied with her two tiaras.
Posted by Sarah at 3:40 PM