Last night we celebrated the start of Purim by going to temple for the pizza party and Megillah reading.

When I announced our plans the kids were excited over the prospect of pizza and cookies. Then we started the frantic cobbling together of costumes (it’s a great holiday, you are encouraged to wear costumes and make noise). Rebecca quickly announced that she would be a princess. That would be easy enough to achieve with her tiara, matching scepter and her new party dress. Jake settled on Mordechai and decided he would need a big white beard and glasses. The rest of his outfit would be his nice corduroy pants and a polo shirt. Meanwhile Nate was supposed to be at baseball practice at 5:00, so he put on his baseball togs. Nate and Jake then talked to Max and tried to convince him to be the King. Max went along with the idea until we tried to dress him. He flat out refused to decorate or wear his crown and stated that he “did not want people looking at him or to wear a king dress.” That was fine by me; I had an Ester and a Mordechai that was more than enough. I loaded my crew into the van and drove off to the baseball field to meet Larry.

Larry called me en-route to tell me that nobody else was there. Since I was a few minutes away I drove over and we conferred in the parking lot. At this point it was 5 minutes past the start of practice and it was obvious that it was not going to happen (we weren’t sure if it was to be this Monday or next, I guess it will be next Monday). So we decided to all go to temple together. Of course nothing is easy and I spaced out and got in the wrong lane and I had to turn around. Meanwhile Nate was miserable because a) he did not get practice and b) he was wearing cleats not shoes. Luckily Larry pulled over with me and Nate got transferred to his car. They would go home and Nate would put on shoes and they would meet up with us at the party.

I pulled into the temple’s parking lot at just about 5:30. At that point Max wanted to know where his crown was. He decided on the way down it’s good to be the king and wanted to be the king (this one, not that one) after all. I then told him that the crown was still at home. He calmly accepted the news and we all headed inside. 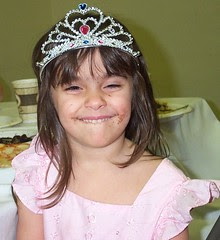 princessEster
Originally uploaded by Teckelcar.
And even Mordechai thought it was good. 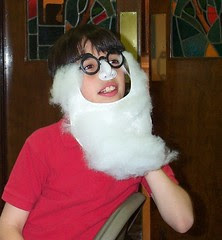 Mordechai
Originally uploaded by Teckelcar. Today I’ll be making Hamantashen and I’ll share the results with y'all on Friday.