Artist of the Week: Sewing

I pulled out my trusty sewing machine the other day to work on my dachshund related project (first mentioned here). I needed to do a few modifications of the stuff I bought on Saturday. The appearance of the machine created a ripple of excitement among my children.

Jake requested that I make a small handkerchief for him from the scraps in my fabric bag and show him how to use the machine. Nate then chimed in that he wanted to learn too and he wanted to make a small pillow. Max and Rebecca buzzed about, fascinated by what I was doing.

When I was done I helped Jake pick out a square and quickly hemmed the edges. Unfortunately the machine was throwing some odd stitches and the kids got treated to a bonus lesson on how to use a seam ripper. While I was ripping out the stitches Jake told me that he was learning how to hand sew in art class. Then I re-hemmed it and Jake was very pleased with the end result.

Next up was Nate. I set up the machine and I let him run the peddle. I would tell him when to stop and when to go while I would position the fabric. He was puzzled at first that we were sewing it inside out, but he quickly understood the reason when told him that this would put the seams inside the pillow. When we were done with our initial sewing I turned the pillow right side out and he stuffed it with some spare batting I had in my scrap bag. Once the pillow was filled we closed up the small gap in the seam to finish the pillow.

Here is the final product: 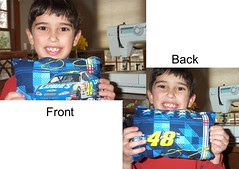 pillowNate2
Originally uploaded by Teckelcar. Nate is very pleased with his pillow.

Later in the car the two boys discussed that Jake knows how to hand sew (he has learned two stitches: whip stitch and something else) and that Nate knows how to use a sewing machine. They figure that between the two of then they can handle all sorts of sewing jobs.

Of course Max and Rebecca wanted pillows too so we picked up some more fabric and I made up a couple of pillows for each of them.
Posted by Sarah at 8:33 AM