This weekend I got to attend two soccer games and avoid a spring carnival.

Saturday was Max and Rebecca’s second soccer game. Max was a bit put out at practice Wednesday because Larry, who is the team’s coach, wasn’t there. After a bit of cajoling and the threat of no game and, horrors, no snack for not playing, he got his act together and practiced. On Saturday I used the twin inducements of Aunt Meryl coming and snack to get Max and Rebecca excited about the game. (At the under-5 level it is all about the post game snack. For a lot of the kids they play/practice for the snacks afterwards. Max really wants to play, but Rebecca is lukewarm at best.)

Luckily Jake’s game wasn’t until Sunday and Nate’s baseball practice was cancelled due to the school’s spring carnival being held at the same time. There were no conflicts and I was able to ferry everyone to their games. As I mentioned, Meryl would be joining us for the wee ones’ game which should prove to be a hoot. Last week (A game I sadly missed) Rebecca provided one of the great comedic moments of the game. She stood firmly in place as the game swirled about her. At one point the ball went straight to her and stopped at her feet. She ignored the ball and another child booted it away. A number of parents laughed at the sight. She would happily do goal kicks and such, but actual game play did not seem to interest her. Max was little more involved, but he refused to take his coat off.

This week Rebecca was far more involved. She actually chased after the ball and tried to kick it. Here she is throwing in the ball. 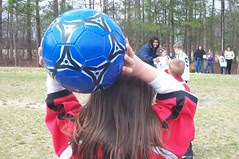 soccerRebecca
Originally uploaded by Teckelcar. However when game play was stopped this is the expression I would get: 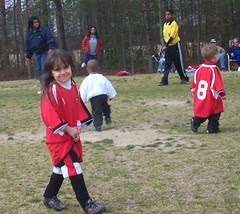 soccerRebecca2
Originally uploaded by Teckelcar. Something along the lines “Are we done yet?”

When we first got to the park Max had a snit about his coat and uniform. Last week they wore white jerseys, this week they were in red. This change was a very bad thing in Max’s opinion. That combined with the fact that I would not let him bring his coat made him very uncooperative (last week he never took his coat off and I wanted to avoid a repeat of that). I sent everyone else ahead and after a few minutes sulk, Max was willing to go. In the end Max had a great time tearing up and down the field

soccerMax
Originally uploaded by Teckelcar. and happily mixing it up with the other players.

soccerMax2
Originally uploaded by Teckelcar. He never actually made a goal, but several times he came soooooo close. Note the humongous uniform. We supply the shorts and the cleats and buy the team jerseys (one white and one red) and the socks from the club. The shirts are huge on the younger players, but the jerseys can be used year after year. It is a nice way that the club helps to keep down costs. However the effect is quite comical on the younger players.

After the game we packed up and headed home. Jake and Nate agitated about the carnival, but I was able to put them off for a bit. I told them that I wanted to feed all of them lunch and get Max and Rebecca out of their cleats and uniforms before heading out again.

At home I was able to distract them with The Incredibles while doing Max’s various therapies. It wasn’t until 2:45 that they remembered about the carnival and by then (It ended at 3) it was too late. I have nothing against the carnival per se; I just don’t want to take four children by myself. That way madness lies.

On Sunday we were on the road at 8:30 am and we didn’t get back home until 2:30pm. The boys had Hebrew school and I had to drive them up to Richmond for that. I then hung out in the youth room with Max and Rebecca. We played with cards, they pretended to be various wild animals and we had a picnic lunch. Our only excitement was when somebody came up to investigate the sound of running feet. Then we went down to pull the boys ten minutes early from their classes so that we could meet up with Jake’s team at the appointed hour.

Jake changed into his uniform and got to eat his lunch in transit. Amazingly we got to the fields bang on time. There I camped out on the sidelines while Nate, Max and Rebecca played with all the other siblings that had been dragged along.

Jake did a decent job and for once he was playing on my side of the field. At one point he ran right towards me to get the ball. 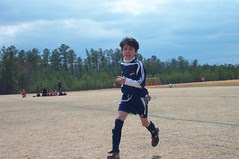 soccerJake3
Originally uploaded by Teckelcar. Here he is again, this time he is backing up for a throw in. 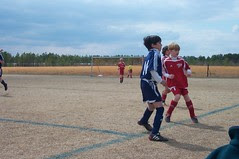 soccerJake2
Originally uploaded by Teckelcar. And yes, the field is completely brown. This has been the driest March in a long time. The field looked completely dead, which is sad sight to see in spring time.

The other team won, 2-0. Our boys played well, but the other team was just a bit better. That and they were awfully grabby. The referee was a bit lax in calling things, to our detriment.

All in all it was a good weekend, but I’m bushed from doing it all without Larry. He was supposed to get back last night, but was delayed in Denver and got to spend the night in Chicago. We’ll get to see him tonight.
Posted by Sarah at 12:37 PM