Wednesday heralded the start of recreational league soccer in our household. Max and Rebecca had their very first practice. 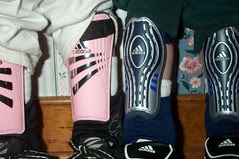 Larry is their coach. The club always needs people to volunteer for coaching and we figured we would have better control over what day they would practice on. Nate has piano on Tuesdays and baseball on Saturdays (when the season starts he will have practice during the week, I think Mondays and Wednesdays). Jake has practice on Tuesdays and Thursdays (fortunately we are carpooling with two other families and I’ll be covering alternate Thursdays).

We have a busy household.

Anyway back to Wednesday. I met Larry at the park and dropped off Max, Rebecca and Jake (he wants to be the assistant coach). Nate, while protesting mightily, came back home with me, so as to finish his homework.

The team is comprised of six kids, a five year old boy (who really knows his stuff), a four year old girl, our two, and two three year old boys (one of whom still has that fuzzy toddler air about him).

According to Larry Max was very game and was happy to be there and never missed me. Rebecca, on the other hand, announced she was done after about ten minutes into their hour long practice. This did not surprise me. She is a rather independent sort and I was wondering how she would do in a team sport. Hopefully her attitude will improve as the season goes on. I’m glad there is another girl on the team. Rebecca craves female companionship and this will be good for her. Sometimes I think she can be a little too girly and I think she needs to get out and do some sort of sport.

This weekend will also be Jake’s big soccer tournament. It is a local one, so there will not be too much travel involved. Just lots of early start times. At least Larry and I can tag team him. Neither of us will see all the games, but Jake will always have at least one parent to cheer him on. The weather is supposed to be fantastic this weekend, 70’s to mid 80’s.

Oh and this week’s recipe: a grown-up milkshake.

Very simple and very refreshing, I think I’ll be making more of these. The odd thing is I dislike coffee, but I love coffee ice cream and liquor. The chocolate was a last second addition and I’m glad I put it in. Of course, all things are improved with a little chocolate.
Posted by Sarah at 2:51 PM