Artist of the Week: Cartography 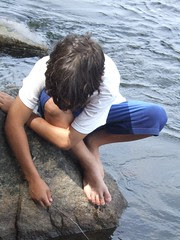 Nate
Originally uploaded by Teckelcar
Nate is this week's artist.

I love this picture I took of him last month. He is perched on a rock on the bank of the Jame's River. He's all arms and legs with the added bonus of being precariously balanced on a rock. It is so very, very like him.

He is my little man of action and even when he is still, he is in some small way in motion. There is a reason that he has a shirt that says I do my own stunts.

Anyway, what is more befitting of such a restless spirit than a map.

A map can take you to new places and guide you back home when you are done. Or, as in this case, it is a map of your making, only limited by imagination. 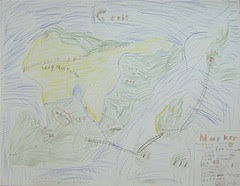 Nate's Map
Originally uploaded by Teckelcar
Nate dragged home an enormous piece of paper this week from school, his assignment was to make a map. He immediately set to work with little urging on my part. Every one else was inspired and have been making maps along side Nate. The map is mostly done and is not due until Thursday. I'll have him fix a few spelling errors and add a compass rose. On Friday I just may drive him to school to protect the map from the rigors of the school bus.
Posted by Sarah at 11:57 PM