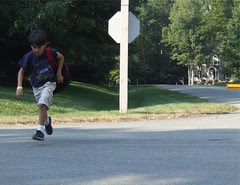 off the bus
Originally uploaded by Teckelcar
So far school has been a big hit. They are coming home with smiles and happy to go back the next morning.

Nate is settling in his new school and likes his teacher. His only complaint is that his bus ride is too long. At a little under two hours round trip he's right about that, but there isn't much we can do short of my driving him in. At least he gets to ride with a bunch of his buddies from his old school that also made the cut for the gifted program.

Jake too is in a new school with a longer bus ride. The middle school is a bit further away and as an added bonus his school starts an hour earlier than the elementary school. So far he has been bringing home tons of forms for me to fill out. Not much learning has gone on yet. The biggest change for him is that he now goes from class to class, no longer does he have his own desk. He is okay with this except he doesn't have a locker. For whatever reason the school has not yet assigned lockers to the students. So everybody is stuck lugging around overstuffed backpacks all day long. Hopefully he'll be getting one today or tomorrow. 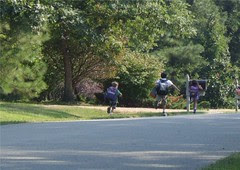 running home
Originally uploaded by Teckelcar
Max and Rebecca, meanwhile, have been having a great time riding the bus and going to school. They are in separate classes (district policy for multiples) and they both like their teachers. The most interesting bit of news is that they chose not to ride together on the bus. That tells me that I was right that they were ready to be separated at school and not to buck the district policy. They are two very different and independent personalities and are not dependent on each other.

And me? I've been enjoying the quiet.
Posted by Sarah at 3:26 PM