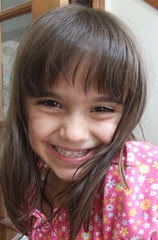 Rebecca
Originally uploaded by Teckelcar
Yesterday the kids played in their first game of the season. They had been practicing for the past two weeks, but now it is officially soccer season.

The biggest surprise has been little Miss Rebecca.

The last time around she hated the whole thing. Practice was spent asking when she could go home and only minimally participating. Mind you the participation only occurred because I told her if she didn't practice than she would not get any snack after the game. It was a credible threat, we both knew I would deny her the treats when push came to shove.

Games were, if anything, worse. During one memorable match that I missed, Larry told me of how she spent her time on the field stock still with her arms folded across her chest. The ball at one point came to rest at her feet and she did not move a muscle. Eventually another child careened by and booted it away.

So she skipped the following season, we saw no point in pursuing the matter.

Then I noticed a subtle change in attitude. She was spending her time watching her siblings practice and play and she started to show a little interest.

When it came time to sign up for our current season I asked her if she wanted to play and she said yes. I repeated the question a few more times over a weeks time and she still replied yes. Larry was a bit dubious, but he did sign her up along with the boys. We also signed her up for soccer camp when we up at Nana's (my mother) house in Vermont.

All four of our kids had a wonderful time, but it made the deepest impression on Rebecca. I think the camp was the turning point for her and how she felt about soccer. She got to meet other girls her age playing soccer and she found out that playing soccer is fun.

At practice she has been engaged with her team mates and was actually trying. Then there was the big moment. Rebecca wanted to know when was she going to play a game. She then proceeded to count down each day. She actually squealed with joy when she woke up on game day.

So now I have a little soccer girl. What a change from last year.
Posted by Sarah at 11:26 PM