Doe, a Deer, a Female Deer 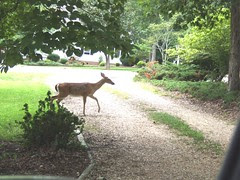 doe
Originally uploaded by Teckelcar
Because we live in a very woodsy area with large undeveloped tracts nearby, we have a lot of deer. There are three does in particular that hang out around house.

Last Friday I had a close encounter with one of our resident does as I was pulling out of the garage. I had just gotten the car out and pointed towards the driveway when I spotted her lingering in the flowerbed alongside the driveway. I stopped the car and we both just looked at each other. I then remembered my camera, fished it out of its case and was just able to grab this shot as she strolled in front of my car.

She was completely relaxed in my presence and only left because I had rudely interrupted her activities. 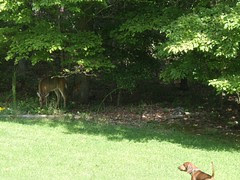 John Deer
Originally uploaded by Teckelcar
Today I let out John and a few minutes later he was barking his fool head off. When I took a look at what all the fuss was about I saw yet another of our deer on the edge of our lawn.

John is deeply offended by the deer and always loudly announces their presence on our property. He rushes forward barking until he gets about 4 feet from the deer and breaks off his attack. I think when he gets close up to the deer he suddenly realizes just how big they are. Meanwhile the deer graze on, completely ignoring the dog. They only leave when I show up and even then it's not a pell-mell race, but a slow melting into the woods.

Our deer have completely adapted to suburban life.
Posted by Sarah at 3:45 PM