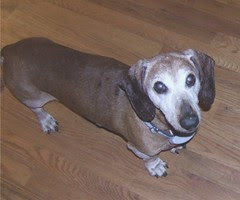 Crunch
Originally uploaded by Teckelcar
Crunch's 15th birthday is this weekend and he is really starting to show his age now. He is very much an old dog.

He wanders around the house and barks, sometimes for little reason, or least for no reason I can figure out.

He doesn't really do the stairs from the deck to the backyard yard. Going down the three steps is just too tricky, he ends up doing a bit of a tumble with a face plant. Some days he can go up, but usually he gets stuck halfway up and barks for me to come fetch him.

He still wrestles with his son John, but it is no longer the no holds barred Greco-Roman form, it's mostly a bit of a chase and John flopping over and the two of them mouthing each other.

He is longer fit to show, not even in Juniors, but he'll get to tag along to next month's show for old times sake. It's painful for me to see his decline, but it's better than the alternative and having no Crunch at all.
Posted by Sarah at 11:50 PM