I Wish I Could Be Mailed To Australia 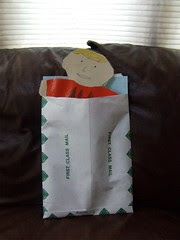 Flat Stanley
Originally uploaded by Teckelcar
Last week went to Nate's school for its open house. We got to meet his teacher, get a guided tour of the classroom with Nate and bring home Flat Stanley.

This is actually Nate's second Flat Stanley. Last year he sent one to Grandma and Grandpa's house. Stanley got to go to NYC, eat pizza and sleep in the guest bed. He even got see far more snow than we ever get down here in Central Virginia.

This time around Nate wanted to send Stanley even farther. He first thought of my brother in Colorado. I suggested my friend in Oregon, she is an Elementary school teacher and I know she would get a kick out of having Stanley around.

Then I remembered my friend Paul in Australia. He has a son, Ben, a little bit older than Jake and twin girls, Jessica and Kirrilly, that are right about Nate's age. I emailed Paul to ask if they could do it and he said they were up to the task. The best part is that their next school holiday will be the first two weeks of October. They will be able to give Stanley the grand tour.

So today I packed up Stanley with a few things for the kids and a couple of maps and brochures of the area. I thought it would be nice if they could see where Stanley came from. The whole mess fit into a flat rate envelope and get mailed today. To be on the safe side I scanned Stanley so not all would be lost if he didn't survive the US or the Australian post.

I can't wait to see what adventures he gets to have in the land down under.
Posted by Sarah at 11:53 PM