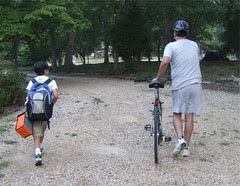 back to school
Originally uploaded by Teckelcar
Well we did it.

Jake was first out, that is a picture of him walking to the bus stop with his father. Larry escorted him to the stop, about one and half blocks away and then went on an early morning bike ride. There are a fair number of kids at the stop and Jake already knows a few.

One down, three to go.

Nate's bus is next, closely followed by Max and Rebecca's. They could have all ridden the same bus, but Nate is in the gifted program and gets to bused to another school.

8:30 came and went, the natives were getting restless. Maybe we missed Nate's bus.

At 8:45 Max and Rebecca's bus showed up, a bit late, but still on schedule. The driver was delighted to see the dynamic duo and was a bit surprised that Nate wasn't coming on. I asked her about the other bus and she told me that she hadn't seen the other driver, but she did see another one of Nate's fellow gifted students waiting at his stop.

So we hadn't missed the bus, it was apparently running late, very late.

I waved goodbye to Max and Rebecca and told the driver that I guess I should drive Nate in myself. If we left now he would just get there on time. She agreed and then shut the door and pulled away.

Nate and i ducked back home. I tried calling another mom about the bus, but got no answer. Nate and I got in the van and started to drive to his school. When we got about a block and half from our house (Jake's bus stop to be precise), Nate's bus pulled onto our cross street. She pulled up next to me and I said" I think I've got one of yours."