Artist of the Week: Band 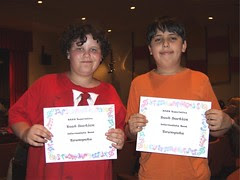 best section 2
Originally uploaded by Teckelcar
On Monday Jake and I went to the band award ceremony and potluck dinner. Since it was such a long and frankly boring ceremony last year we decided that it would be just the two of us, itchy seven year olds need not apply.

We ended up missing the opening concert by the jazz band, which was fine by me, however that meant we were a bit late for dinner. We were on the tail end of line and ending up out of luck with the potluck. All of the main dishes were gone and most of the sides. I had potato salad, coleslaw, and my brownies for dinner. I'm not sure what Jake had, other than just brownies and pumpkin pie.

However all was forgotten during the actual awards ceremony.

awards
Originally uploaded by Teckelcar
All throughout the Beginning band awards he told me he wouldn't get one award after another from Most Dependable, Most Band Pride, Best Musician and so on. Some of the awards were decided by class votes and others were up to the Band Director. Jake and his fellow trumpeter (the other Jake) figured that they, the trumpet section would get loudest section. He confided to me that he would never get the Outstanding Leadership Award (which is determined by the director), because he spent most of his time arguing with one of his classmates.

So when it came time for the Intermediate awards Jake was shocked when he got Most Band Pride, not overly surprised by Best Section and utterly floored when he got Outstanding Leadership. It's not too often I get see Jake speechless and it was quite a treat.
Posted by Sarah at 11:19 PM