One Down, Three to Go 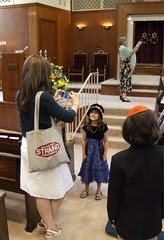 picture time
Originally uploaded by Teckelcar
First off I would like to state that Jake did a wonderful job both Friday night and Saturday morning morning.

On Friday my cousin flew in and joined us for dinner. My husband's sister was staying with us and the two of them see to really hit it off. We had a wonderful and relaxed early dinner with many of Jake's favorite foods, from spinach pies to marinated flank steak. It was an excellent way to get him relaxed before the evening's big event.

Then it was time to dress up and go to temple. Both my cousin and my SIL came along with us early to service and took a ton of pictures before the start of Shabbat. Larry took the first picture here on the right while I was setting up the tripod. My sister-in-law is photographing little Miss Rebecca (such a little cutie pie) and my cousin snapping a few of Jake up on the bima. I didn't even know that Larry was taking pictures at the time and I was delighted when I saw them today as I downloaded them from the camera. 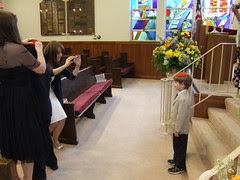 so cute
Originally uploaded by Teckelcar
In the next picture, also by Larry since you can see the back of me while I adjust Nate's Kipot. (And here's a shout out to KoolKipah.com, they came in on time and looked great.) Max is looking as dapper as ever and you get to see one of the gorgeous arrangements I ordered. For the most part we were were sensible and stuck to a modest budget, the two arrangements on the bima were one of our extravagances and was totally worth it. They still look good and this was after being bounced around in my minivan on the ride home.

As for the Bar Mitzvah boy, a nervous cough that has been plaguing him when he felt stressed was pretty much absent. The Rabbi provided a hidden spot for Jake to place his cup of water so he could refresh himself throughout the service. Hebrew is not an easy language to speak, the various throat clearing noises are challenging enough for someone that hasn't developed a cough. At the end of Friday's service numerous people praised him for his very clear and well enunciated voice. I think all the positive feedback helped Jake gain confidence for the Saturday service. 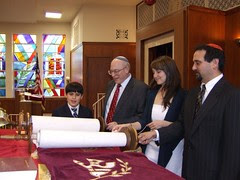 Aliyah
Originally uploaded by Teckelcar
Saturday morning Larry took Jake down to temple about 45 minutes early. It was Jake's last choice to smooth out the Haftorah blessings with the Rabbi. It was time well spent.

Jake still had a little trouble with that particular blessing, but the whole service went beautifully. The only real disater the whole day was my cell phone and that's a story worthy of it's own post.

The both the Friday night oneg and the Saturday kiddish luncheon went without a hitch. Everybody had a great time at all of our parties. During the Saturday night post Bar Mitzvah pizza and laser tag party Jake told this was the best party ever and it was the best day of his life.
Posted by Sarah at 11:50 PM