So Proud and Another Milestone 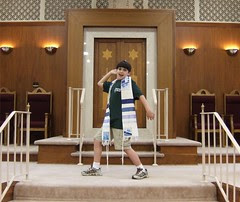 And I must say I'm very proud to be that teenager's mother.

I was proud of him at his Bar Mitzvah. He did a great job and really stepped up to the occasion.

However that's nothing compared to how I felt last Friday.

The Rabbi has been out of town last week and this week. He sent an email around the congregation announcing his absence and an offer to help coordinate who will do what for the services. On a whim I asked Jake if he was interested and he (much to my surprise) said yes, he would like to help out on a Friday.

So on Friday my boy helped lead services with two other members of our congregation. Originally he was to serve in a helper role, but in the end he did most of the readings. He did a bang up job and, as one other member put it, he had a real presence up on the bimah.

I told him afterward that I was even prouder of him leading services after his Bar Mitzvah then I was during the Bar Mitzvah. He didn't have to do it.

His response was that he like doing it, it's fun.
Posted by Sarah at 2:15 PM