Artist of the Week: Portrait 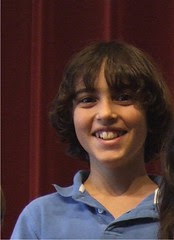 Nate
Originally uploaded by Teckelcar
This week's artist is the always irrepressible Nate. He is a little bundle of energy that always is up for doing something active either mental or physical. I'll often send him outside to run laps around the house to burn off a bit of energy.

One of his favorite things to do is to tumble about with the dogs and I swear they just view him as one of them. In his quieter moments I'll find him on the floor stretched out next to one of the red boys, holding him close and murmuring into an ear.

Once he is out on his own I don't think he will ever be without a dog by his own choice. As soon as it is feasible he'll have some sort of dog by his side. And knowing his sweet nature it will most likely be a rescue or shelter dog. He'll have a hard time in college when he'll be dogless during the semester, during visits home he'll get his dog fix. 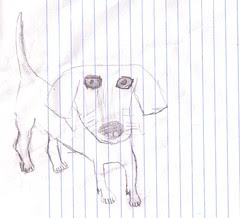 John
Originally uploaded by Teckelcar
So the subject matter no surprise to me when he presented to me this portrait of John.

My first guess was Dell, because Dell is the dog he spends the bulk of his time. But I was wrong. It's John, which makes sense because John is the dog most likely to stay still. Dell is always trying to crawl into your lap or squirm around on his back by your side.

I think it is a wonderful picture of John. Nate spent a fair amount of time on it and is in fact still redoing parts here and there. I'll have to teach him that at some point you have to let go and stop second guessing yourself.
Posted by Sarah at 11:00 PM