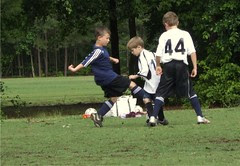 defense
Originally uploaded by Teckelcar
This weekend Nate and Max got to play the last game of their respective seasons.

Max was first up on Saturday. It was a cool dampish morning with overcast skies, perfect weather for soccer. Much preferable to the scorching temperatures from not so long ago. Max's team played well, in fact it was the best they had ever played as a team. They had finally gelled as a team just in time for the last game. It's unfortunate that they would play their best during their last game. They didn't win, but it was a good game to watch and they did tie their opponents. 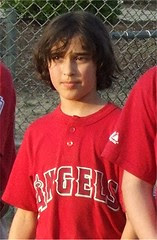 disappointed
Originally uploaded by Teckelcar
Nate's team, meanwhile was embroiled in the end of season playoffs. They lost their first game, but it was a double elimination tourney. They could still battle back in the loser's bracket to win the whole shebang, which was exactly happened last year to Nate's team.

After their initial loss, the Angels were able to win their games on Thursday and Saturday. We were back at the field on Sunday for their next game. It was a beautiful evening, a bit on the warm side, but lovely nonetheless.

The team started off strong with four runs in the first inning and pretty much shutting down their opponents. Unfortunately the other team got a good Rally going and in the sixth inning they were able to preserve their hard won lead. It was tough loss for the team. Most of the boys looked a bit sad and disappointed during the post game presentation as did the friends and family on the bleachers near our team's dugout. 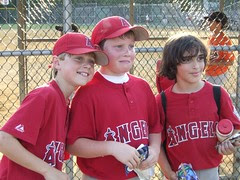 angels
Originally uploaded by Teckelcar
However, we are talking about 10 year old boys. After scarfing down some snacks they all seem to bounce right back.

Ah the miracle of junk food and good friends.
Posted by Sarah at 11:57 PM