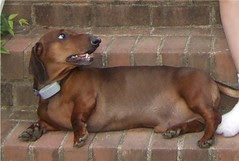 Dell
Originally uploaded by Teckelcar
Normally on this day I celebrate my husband and what a wonderful father he is to our children, but this year I'm doing something a bit different.

Larry is not the only father in our household, Mr. Delly Belly is one too. Admittedly he has no contact with any of his get from the two litters he sired, in fact he probably isn't aware of the fact that he is a father. All he knows is that he likes girls. And food. Oh, and tummy rubs. Dell is a very simple dog.

Anyway, after the kids presented their father numerous hand made cards and drawings, they felt that Dell deserved some recognition as well. 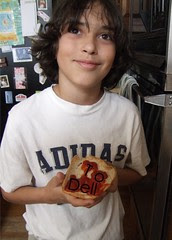 card for Dell
Originally uploaded by Teckelcar
They tried the more traditional route of a hand made picture and/or card (I wasn't privy to the actual item, I just heard about it after the fact). However, much to nobody's surprise, Dell ignored it (Crunch, on the other hand, would have happily shredded any piece of paper you gave him). It was vaguely amusing, but a bit disappointing.

Then we came up with the idea of an edible card. I gave Nate a slice of bread and he wrote on it with ketchup "To Dell." Ketchup is not the easiest medium to write with, but it worked. Dell loved his new card and promptly devoured it. All the kids loved watching Dell wolf down the card.

Later Dell then got to go to a dog show and see his public. He had a great time and as an added bonus he went winners dog and best of winners for one point. Thus bringing his grand total to five points. Just ten more points and two majors to go!
Posted by Sarah at 11:56 PM