Artist of the Week: A Penguin Adventure

Nateaotw
Originally uploaded by Teckelcar. Last week Nate brought home a little booklet that he made at school called “A Penguin Adventure.” 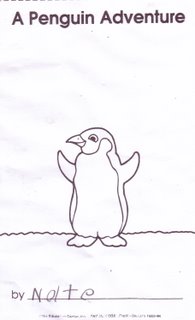 Each page features a cute little line drawing of a penguin and a question asking what the penguin sees at a particular spot. The assignment was that the student draws a picture in the appropriate spot and fills in the blank “Penguin sees______.”

On the first page Nate drew a General Grievous game controller and a TV set on the sled. 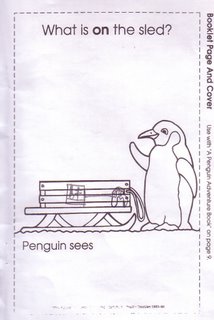 It is a very reasonable item. What Penguin wouldn’t want a plug and play TV game to while away the long Antarctic night?

On the Next picture Nate’s sense of humor starts to show. 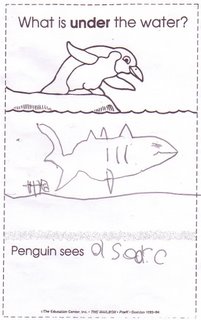 Here we have a very menacing shark and a deceased fish under the water. I think the penguin should hold off going into the water for a bit.

Now we have the penguin peeking into an igloo. 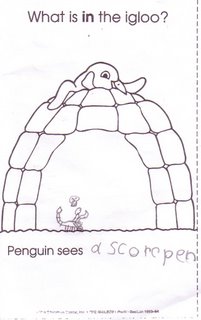 Oh my! There is a very dangerous scorpion waving its claws about, note the rather Punisher-like skull over the scorpion. Nate said he drew the skull to show that the scorpion was poisonous. Oddly the penguin seems unconcerned and seems to be waving at the scorpion.

The next page is one of my favorites. Here we have a happy penguin waving at a snow penguin, oblivious to the danger overhead. 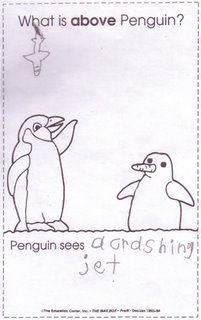 Nate has a crashing jet right above the penguin. I hope the penguin gets out of the way when it sees the jet.

On the last page it looks like the penguin has avoided the crashing jet. 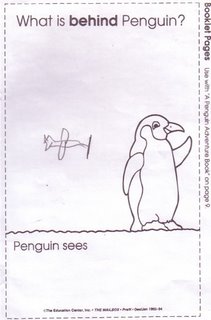 Instead a low flying plane is right behind the penguin. I don’t know if the penguin ever saw the plane, Nate didn’t fill in the blank. I hope it is just because he ran out of time in class.

Either way, I think the penguin needs to move to a safer location.
Posted by Sarah at 11:17 AM