John is growing up to be a very handsome boy. 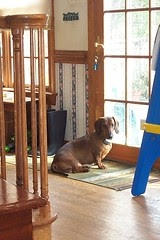 john
Originally uploaded by Teckelcar. My current dilemma is whether I bring him or his father to the national specialty in April. I can’t bring both because I’ll be sharing a room with a very good friend and her female dog. Two intact male dogs plus one intact female dog equals a dogfight. Right now the red boys get along, but I know that this would be too much. John is a teenager, all raging hormones and Crunch is very dominant and likes to remind John on a regular basis that he is the big dog. Anyway, John continues to chew anything he can get in his mouth and is still the Jaws of Destruction.

A couple of days ago we had a little incident with the Jaws of Destruction. Remember that cute mouse Max got for Hanukkah? Here is a cropped version of the picture: 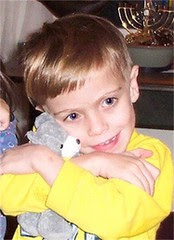 Max&mouse
Originally uploaded by Teckelcar. You can see in the picture how much he loves his mouse. 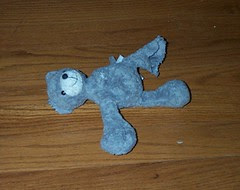 deadmouse
Originally uploaded by Teckelcar. By the time I found it, one leg was completely missing, one foot was ripped off and the ears were chewed down to little nubs.

The mouse was very clearly dead. There was absolutely no way I could resurrect it. The missing pieces had completely disappeared. Max burst into tears when I told him that mouse was dead. He was devastated and pleaded with me to get him another mouse. After a long talk about not leaving mouse downstairs I relented. So on Friday we picked up a new mouse. Before we entered the store Rebecca announced that she wanted a new pegasus (John had gnawed off an ear) and I agreed.

The store had a bunch of mice, but there was no pegasus. Rebecca did find a pink and purple dragon and she glommed onto that. As we went through the store Rebecca chattered away about her new toy and how they didn’t have pegasus, but when they did she would get a new one.

Whoa, I didn’t agree to that.

I stopped, squatted down to her height and told her she could have the dragon now or she could wait and get a new peasus later.

This stopped her cold. She thought for a bit and told me she wanted the pegasus. She then helped me put the dragon back on the display rack.

I was amazed at how well she handled it. She was very calm and never looked back.

My little girl is growing up.

Oh and John, he had one night of feeling simply awful and urped up little bits of chewed up toy. Of course it was all over the rug and not the hardwood floors. Thankfully I have a small carpet cleaning machine and put it to good use. The next day John was back to his bouncy old self.
Posted by Sarah at 1:21 PM