Henry died last night. He was a sweet little puppy. We saw him last September along with the rest of his siblings. The kids had a wonderful time as did the puppies. 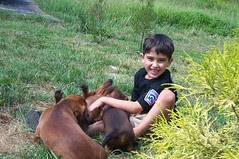 Nate&puppies
Originally uploaded by Teckelcar.
I’m not sure which puppy is which in the pictures I took, but that could be Henry on his back next to Nate.

I had spoken to Diane earlier in the week and she had noticed that Henry seemed a bit off. Yesterday he took a turn for the worse and she took him to the vet. They put in an IV and he seemed to rally at first when he saw a little boy, but then he crashed. They would bring him back, but then he would crash again. It finally hit the point where they could keep him going, but at a terrible price. So the decision was made to let Henry join his Momma Fiona at the Bridge.

He wasn't my puppy, but I was part of his creation. He was a sweet and loving little pup who was very much loved.

It was just one of those freaky things that just happen.

Go in peace little one, it is just not fair that your life was cut so short.
Posted by Sarah at 2:53 PM