As y’all have probably figured out by now we went north to go visit family for the holidays.

My mom lives in Vermont and we are pretty much guaranteed to get a nice taste of winter when we go visit. This year was not an exception, but it was a close thing with the rain and warm temperatures (40’s at Christmas time, how absurd). There was a good 4-6 inches of wet snow in her backyard. The kids had a blast making snowman, knocking them over and having snowball fights. It wasn’t until Monday that we went sledding.

happy
Originally uploaded by Teckelcar. The town park is just a few houses down from my mother’s and there is a nice sidewalk to take us there. The park is at the bottom of a small valley formed by a brook that extends to behind my mom's property. As a result it is a flood plain that has sensibly been turned into a park with a playground and all sorts of playing fields. To reach the park you have to descend a fairly steep hill down to the flood plain. In the winter the hill makes for some spectacular sledding.

On Monday we all trooped over to the park. It was warm (the aforementioned 40’s) and the snow was soft and slushy. The sledding was fun, but a bit wet. The bulk of the hill had a large slushy puddle at the base. It was fun to zip through the puddle and send up a large wave of slushy water, but you ran the risk of getting soaked and possibly stranded in the puddle. We elected to stay near the staircase on its East side. There were various hazards on that side, but they were easily avoided and there was no puddle. We stayed out for about an hour before hunger called us in for lunch.

On Monday night the temperature dropped and the snow solidified. As a result sledding was spectacular on Tuesday and Wednesday. The sled runs were fast and the puddle had frozen over. With a good push you could rocket down the hill and almost across the field. 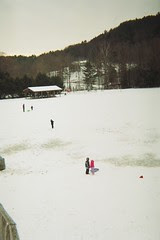 lookingdown
Originally uploaded by Teckelcar. Somebody had built a small jump and Nate had a glorious time jumping his sled. For Hanukkah we gave him a shirt that said “I do my own stunts” which was really appropriate. 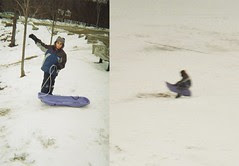 jump
Originally uploaded by Teckelcar. Here you see Nate just before he gets on the sled and during mid-jump. This one wasn’t quite as good as the other jumps because you can see he is about to tip over. 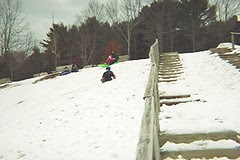 lookingupstairs
Originally uploaded by Teckelcar. In this photo you get to see the handy staircase on the hill. I must say it made tramping up the slippery slope much easier.

Near the end of our sledding session on Wednesday we also went to take a look at the playground and the brook. The playground was a bit lame in the snow, but the brook was beautiful. 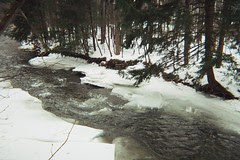 bloodbrook
Originally uploaded by Teckelcar.
As an added bonus I took the kids to a footbridge that crossed the brook. 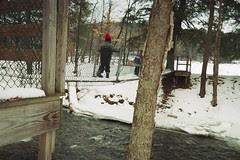 bridge
Originally uploaded by Teckelcar. It gave me the heebie-jeebies crossing it in the snow, but it was fun. Quite a contrast to the river and bridge that Terry featured over at his blog!

After all of our fun and excitment down by the brook we did a few more runs and headed back to my Mom’s house. 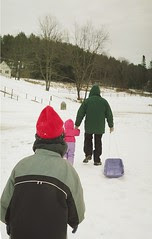 headingback
Originally uploaded by Teckelcar. Mom’s new house is turning out to be grandchild heaven.
Posted by Sarah at 1:16 PM