Sunday I was quite a busy beaver. I went out and got some building supplies for the shed, a new toilet seat for the kid’s bathroom and a cartridge for the tub facet.

The faucet had been leaking for a while. Originally it was just a slow drip, but it had been worsening (as these things are want to do) over time. For a while if I banged on the handle the drip would stop and then that stopped being effective. Finally, the drip turned into a stream and I realized I had to do something. Admittedly I procrastinate, but I was loath to do this job because I did not have ready access to the shut off valves to the tub. The tub’s fixtures abut our linen closet, but the builder did not provide a knock-out panel. I could cut into the back wall of the closet, but I don’t like cutting blind into a wall. Instead I shut off the main water supply valve to the house. This meant I had to go to the far corner of the crawl space under the house.

Most of the crawl space is fairly reasonable and it is possible to walk about with only ducking your head. But the dirt floor rises towards the far corner and you have to scuttle about, twisting by pipes and low hanging phone wires.

crawlspace2
Originally uploaded by Teckelcar. Once the water was shut off I tromped back upstairs to fix the faucet.

I tried to get a picture of the drippy faucet, but the water drips wouldn’t show up, so you’ll just have to believe me on this one.

I popped off the cap and removed the faucet handle. 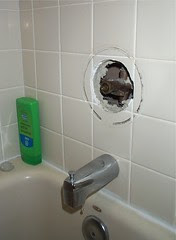 bathtub2
Originally uploaded by Teckelcar. The cartridge was a bit tricky, but the manufacturer did supply a handy tool. Once the cartridge was out I was free to pop in the new one. This proved to be tricky. The little piece that holds it in place would not go back in. It took a fair about of wiggling and repositioning until both sides of the pin slid into place. Finally it went in and I was able to put the handle back on.

Then I trudged back to under the house and turned the water back on. Sucess! Now we have a nice drip free faucet.

bathtub
Originally uploaded by Teckelcar. The toilet seat was a bonus. I figured since everything else was getting fixed up it was time to replace it as well. It was getting chipped and had odd bumps on the surface. The bathroom now looks 100 % better.
Posted by Sarah at 5:18 PM