So What Ever Happened to Winter

Yesterday was another lovely day in Virginia, calm winds, a few clouds and a high of 68. It was a nice late spring day at the very tail end of January.

Now I understand that winter in Virginia is milder than what I experienced in Vermont and Wisconsin, but this is ridiculous. During our previous six years in the Richmond area we have had a couple of significant snowfalls (2-4 inches) each January through February. So far we have had a whole lot of rain, thunderstorms and a tornado warning. We did get some snow in December, but that’s all folks.

Meanwhile the boys, for whatever reason, had only a half day of school. So what do you do with four kids on a beautiful, warm, spring-like day? Why you go to the zoo of course! Once all their homework was done we all piled into the van. Jake, Max and Rebecca were very excited, but Nate was not. He wanted to go to the park instead of the zoo, but he was in the minority. I knew once we got there he would come around and he did.

We had a great time. All of the animals were out and the zoo was not crowded. There are some new animals such as this gibbon and her baby... 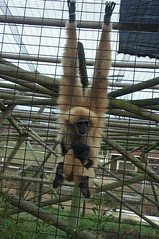 gibbon
Originally uploaded by Teckelcar. ...and of course our old favorites the giraffes. 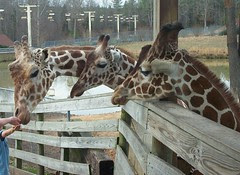 3giraffes
Originally uploaded by Teckelcar. Nate and I discovered that the softest part of a giraffe is the fur right behind its ears. 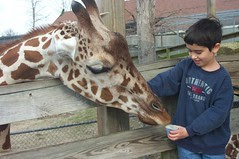 giraffe&Nate
Originally uploaded by Teckelcar. Jake meanwhile had fun feeding them and telling us that a giraffe’s tongue is two feet long. 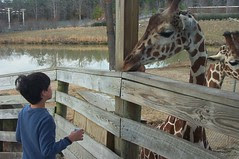 giraffe&Jake
Originally uploaded by Teckelcar. In fact it was so nice out that even the zoo’s population of wild turtles was out in full force. 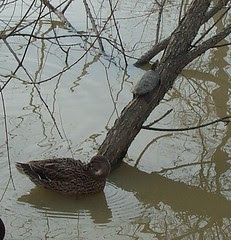 turtletree
Originally uploaded by Teckelcar. It was a great day to go to the zoo.
Posted by Sarah at 12:05 AM