This week’s artists are all four of my brood. 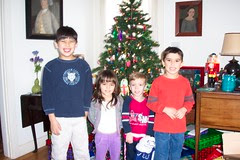 100_58
Originally uploaded by Teckelcar. As I mentioned earlier the kids made most of the decorations to my mother’s Christmas tree. I say most because a few blown glass ones did find their way onto the tree.

Anywho, they did a bang of job of making paper chains, pictures, dangly bead things and more. I supervised them and helped by tying knots and getting the glue to go in the right place. The rest was up to them. They even hung their finished projects on the tree.

On the last day of Hanukkah they decorated cookies (scroll down to the party pack) with food coloring markers. Nate had gotten this from his teacher. It turns out Mrs. H is also Jewish and she had received this and had passed it on to Nate. 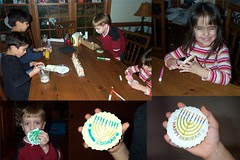 hanukkahcookies
Originally uploaded by Teckelcar. The kids had a great deal of fun coloring their cookies. What could be better than using markers on cookies? Especially when the markers are filled with food coloring and the cookies are still safe to eat! The cookies themselves were a bit blah, which may have been due to the fact that they were dragged up and down the Eastern seaboard. Max’s mouth turned green from his scribbled cookie, but that was it for mess. I will be saving the markers to use again. Maybe I’ll get motivated and we’ll make some gingerbread cookies that I could ice. Mmmmm gingerbread.
Posted by Sarah at 2:14 PM