Artist of the Week: Illustration

As I mentioned last week I have been purging the house of extraneous ancient school work. This week’s selection is of a fairly recent vintage and was created by Jake. 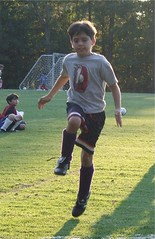 JakeJump
Originally uploaded by Teckelcar. Jake had a massive project in fourth grade near the end of the school year. It was a Virginia History ABC book with additional chapters focusing on Historical figures prominent in Virginia history, historical documents and a brief comparison of the Revolutionary War to the Civil War. The final product got a nice spiral binding and is a fairly weighty tome.

Jake struggled with it for seemingly weeks. The worse part was the teacher kept pushing the deadline back. At first I thought it was just Jake misunderstanding what was going on, but after a speaking with another parent I found out it really was the teacher. This drove me batty. I like clear deadlines and for over a week and a half it dragged on. In the end it was to Jake’s benefit, in that he was able to complete the task, but he didn’t learn anything about deadlines.

Anyway, I digress. At one point he made this wonderful illustration of John Brown. 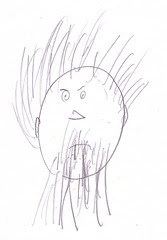 JohnBrown
Originally uploaded by Teckelcar. I think he was trying to capture the 1859 image by Black and Batchelder, but it is a little more like the mural “Tragic Prelude” by John Steuart Curry in the Kansas State Capitol. In the end he decided not to use it, instead he printed out images culled from the internet. It was much easier and a whole lot faster, but it was a bit of a loss.

Jake sometimes goes on about he can’t draw, but I disagree. I love it and I was very careful to tuck it out of harm’s way. It is very evocative of the drawings of Quentin Blake, a wonderful illustrator that brilliantly captured Roald Dahl’s characters.
Posted by Sarah at 3:02 PM