Return of the Soccer Mom

The boys have been going to practice for the past two weeks (Rebecca is not playing soccer due to her complete lack of interest). Yesterday was the official start to the fall soccer season with a morning filled with games.

Nate was first up with a 9:00 am game. His practices have been interesting since it was only at the last practice that enough team members showed up for a complete team. On game day his team had the minimum amount of players. There were no substitutes and near the end of the game one child dropped out from shear exhaustion. It’s hard to play the whole game without substitutes. The impressive part was that Nate’s team completely dominated the game, even when they were down a player. 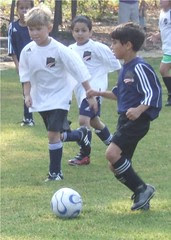 soccerNate
Originally uploaded by Teckelcar. Nate had a great time. I only caught the last 1/3 of the game because Larry went to the field first with Nate. I came a bit later with the rest of the crowd.

Next up was Max. His game was conveniently located right next to where Nate’s team had played. We moved on over to watch Max’s team in action. Max plays on a U(under)5 team. At this level it is usually just a little mob of kids moving around the tiny field and there are no goalies. Max’s team also dominated the game. One little girl was adorable she would kick the ball down the field and then turn toward her parents with the biggest smile.

Max has become a much better player since last season.

soccerMax
Originally uploaded by Teckelcar. Last spring he made one goal for the whole season, yesterday he made four. Each time he would make a break from the pack and dribble the ball down the field and into the goal. I was even able to catch one such breakaway on film.

Last season he did not have quite the ball control that he has now. It is fun to see how he has progressed since last spring. I guess taking him to soccer camp was worth while.

Then it was Jake’s turn. I didn’t take any pictures of his game because a 1/2 of my time was spent walking small people to and from the restroom. A restroom that I would like to note had a, umm, minimalist air about it. Normally (at least in the woman’s room, I can’t vouch for the men’s portion) there are three stalls along the far wall and facing them two sinks. On Friday I had stopped by the park and the restrooms were locked and two port-o-potties were stationed out front. On Saturday the restrooms were unlocked, but there were no stalls, just three toilets all in a row. It was decidedly odd; however it was better than the rather nasty port-o-potties out front. At least the toilets flushed, there was ample tp and the sinks worked. Anyway I spent a lot of time trotting back and forth to the game and missed a fair amount.

But what I did see of the game was quite good. At Jake’s level U12 it is an actual game with passing. The teams were fairly closely matched in skill and that made for a good game to watch. Jake’s team lost by one goal, but it was a really good effort. I think as the season progresses they will get better.

So now I’m back o being the proverbial soccer mom.
Posted by Sarah at 11:11 AM