Artist of the Week: Soap

This week’s artist is my Aunt Rose. Below are some photographs of her in the program from the memorial service. 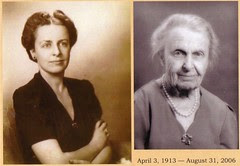 AuntRose
Originally uploaded by Teckelcar. In her day she was an avid horsewoman, skilled at needlework and in her younger years she assisted her mother, my grandmother, in bookbinding and making marbled endpapers.

I suspect she was also a very independent woman in her own way. During World War II she went to Washington and worked for the intelligence unit of the War Department. I think the picture on the left was taken around then.

Anyway, during the reception after the memorial service one of her daughters brought out a good sized wicker basket. It was filled with what looked like some sort of artisan bread or possibly cheese. 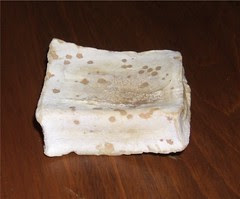 soap
Originally uploaded by Teckelcar. In reality it was soap, lye soap to be precise. About thirty years ago my Aunt Rose decided to try making her own soap.

Why, I’ll never know, but I’m sure the innate Yankee frugality in my family had something to do with it.

My cousins found it in the barn and decided it would be fun to have it out after the service. Everyone was welcome to take some home.

I think mine will end up by the garage sink. It is suppose to be pretty potent stuff.
Posted by Sarah at 11:51 PM