Today is Crunch’s birthday. He still looks good at 14. So far he has gotten lots of pats, part of a peanut butter and jelly sandwich and he got to lick the ice cream scoop after snack time. 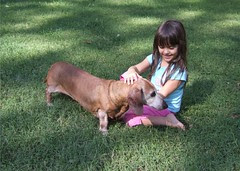 Crunch&Rebecca
Originally uploaded by Teckelcar. He is still, as I mentioned last year, in incredible shape for a dog his age. Here is a little movie of him trotting about the backyard.

To celebrate this hardy soul I’ve entered him at the Metropolitan Washington Dachshund Club’s fall specialty show. Crunch is entered in veteran sweepstakes, competitive veterans, stud dog and Jake is going to show him in Junior Showmanship. Poor John is only going to be shown in open and I have a feeling he is going to face some very stiff competition.

Jake is a little nervous, this will be his first time in the ring, but I’ll think he’ll do all right. I’ve always said Crunch would be a good junior’s dog. All he needs is someone to hold the lead, tell him what direction to go and put him up on the table. Crunch is a real show dog. He loves being in the ring and his tail never stops wagging.
Posted by Sarah at 4:52 PM