As I have mentioned before, I have been redoing the downstairs bathroom. The wallpaper was peeling and stained with pee. There was a big hole in the hole from when a small person grabbed the towel bar as though it was a grab bar and pulled it off the wall. Three. Times. The first time I changed the towel bar to one that would cover the hole. The second time I was able to shift the bar a bit and cover the now bigger hole. The third time I gave up and put away the towel bar.

We lived this way for quite awhile. In order to fix the hole I would have to redo the walls. I didn’t just want to use a patch of wallpaper because it would be all fresh and lovely, in direct contrast to the battered paper surrounding it. Painting would be good idea, but I’d have to strip the walls so as to eliminate the pee stained areas. So I procrastinated. Then our home got tapped for the September meeting of my dachshund club.

Larry and I discussed what color the bathroom should be. He thought so sort of off white would be nice. I liked the idea of yellow. Normally I not a bold color person, but I have my reasons. Larry paused for a moment to mull the idea of color and then replied “Ahh, all the better to hide the pee.”

Mind you I would clean the pee, but I do not want a repeat of the staining on the wallpaper.

So I brought home a bunch of samples. We even asked the piano teacher her opinion. (Hey, she does use the bathroom when she comes by, so why not?) She liked something called yellow brick road and Larry preferred chilled lemonade. I was useless and liked both. They are both moderate yellows and I thought either would look nice.

Of course when it came time to buy the paint I got neither. It turns out I was looking at the wrong section, I wanted the more durable paint from Pratt & Lambert. The yellow I did get was “ever sunshine” and was right between yellow brick road and chilled lemonade.

Then I painted the walls. 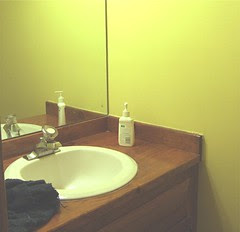 moreyellow
Originally uploaded by Teckelcar. Oh my, what have I done?

It is a far more virulent shade of yellow than I expected. You go into the bathroom and it fairly screams YELLOW!

With the second coat things did improve. I think I’ll end up doing three coats in all. Of course I’ll have to do the ceiling too, since it looks grubby compared to the bright yellowness below.

The good news is after a few days I’m getting to like all the yellow and I found a home for a piece of art I picked up a the farmer’s market a year or so ago. 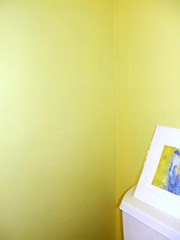 yellow
Originally uploaded by Teckelcar.The yellow on the walls almost matches the yellow in the picture. I’m going to frame it with a nice big mat and a black frame. It should look very sharp when I’m all done. Oh, and the funniest part was what Jake said this morning. “It looks like pee is all over the place in the bathroom.”
Posted by Sarah at 1:08 PM