It is that time of the week again and bright and early this morning Terry posted the following:

It’s time again for the 5,901st (or so) consecutive edition of the Axis of Weevil Thursday Three! Last week’s theme dealt with items of a novel and new-fangled nature, so as a counterpoise to that, THIS week we will talk about things ancient and decrepit. Sound like fun? OF COURSE IT DOES!!

As with all T-Threes, we will give you three questions, and in return expect nothing but your time and answers to those questions. All you have to do is either leave your response below, or leave a link to your blog so we can come over there and look and see what all you’ve written.

1) What is the oldest book you own? (Modern reprints of old books don’t count, so don’t say stuff like the Bible. Unless you actually HAVE an old copy of the Bible, in which case that’s okay.)
2) What is the oldest object you have that you still use on a regular basis?
3) What is your favorite old joke?

Well then, there you go. Hobble off on your walkers and try to remember what the quiz was about, and tell us your answers!

Old stuff, I like old stuff. I grew up in an old house filled with old furniture and old books. This is a fun set of questions. 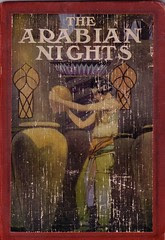 arabiannights
Originally uploaded by Teckelcar. I also have a seventh edition of Swiss Family Robinson from the Every Boys Library series. 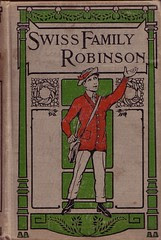 swissfamilycover
Originally uploaded by Teckelcar. It has no publication date (the page may be missing) so it may give the aforementioned Arabian Nights a run for its money. Below is the front’s piece of the book. 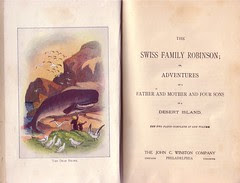 swissfamily
Originally uploaded by Teckelcar. I like the caption of the color plate “The Dead Shark” when it is clearly a whale. I think that indicates that this is a fairly old book.

2) The oldest objects I regularly use would be my roasting pans. My mother gave them to me years ago and they have stood me in good stead. They are perfectly seasoned and as a result are a snap to clean. I also like how I can make the gravy in the roasting pan, something that can be a bit tricky in a disposable pan.

pan
Originally uploaded by Teckelcar. My mother got them from Mama Leonardi and the pans are antiques. She thinks they are from around the turn of the century.

3) I don’t really have a favorite old joke. Right now I’m exposed to a constant barge of very bizarre 4 year old jokes. They often lack a punch line and do not make any sense, but the delivery is always spot on.