As I have mentioned before I bake Challah for us on Friday for Shabbat and this week is no exception. After a bit of hunting through the myriad of cookbooks I own I settled on a fairly traditional loaf from The International Kosher Cookbook The 92nd Street Y Kosher Cooking school.

Today, challah refers to the Sabbath loaves. To keep up with progress, this recipe was developed for the food processor to save time, but it can also be mixed in a large bowl.*

In the bowl or the food processor, combine yeast, 3 cups of flour, sugar and salt. In a medium saucepan (I use a microwave) melt the margarine with the water. Heat to about 110 F (liquid should feel hot, but not burn your finger). Add the still warm liquid to the flour mixture. Mix until fully blended.

While the machine is running add 4 eggs, 1 at a time, until blended. Gradually add enough flour to form a ball of dough that cleans the sides of the bowl. If a processor is used pulse the dough around the container 25 times.

On a lightly floured surface, knead the dough 10 to 15 times, until smooth and elastic. Place the dough in a greased bowl, turning to grease sides. Cover and let rise about 1 hour, or until the dough has doubled in size.

Punch the dough down and divide into three pieces. Cover and let rest 10 minutes.

Roll each piece of dough into a rope about 1 ½ inches in diameter and coil each rope into a circle. Place the coils on a cookie sheet and allow to rise for 45 minutes.

In a small bowl beat the remaining egg with 2 tablespoons of water. Brush each challah with the egg mixture. This gives the challah its characteristic shiny appearance. If used, sprinkle the loaves with poppy or sesame seeds. Bake the challah at 350 for 40 to 50 minutes.

This yields three large Round challahs that are commonly made for Rosh Hashanah (which is just around the corner). Normally I halve the recipe and get two moderate sized braided loaves; one I bake that day the other I braid and freeze for the following week. Instead of dividing the dough into three pieces I divide it in half, one for each loaf. Then I further divide the dough into four balls. Three of the balls are rolled into ropes about 10 to 12 inches long and are braided together. The remaining ball is divided into three and the three pieces are rolled into ropes the same length, just thinner. The three skinny ropes are braided and placed on top. At this point I bag and freeze the extra loaf, the remaining loaf has the egg brushed on top and is baked for about 25 minutes. The loaf is ready when it is golden brown and hollow sounding when tapped. I used to put poppy seeds on top, but I no longer do since they do bad things to Larry’s digestive system.

*I use my stand mixer.
**I use butter unless I want to make a pareve loaf.

By the barrel train there was an assortment of tractors and various pieces of farm equipment. Amongst them there were a couple of flour mills. Jake and Nate picked up a bag of flour to take home. As they made off with their (free!) booty the woman pointedly asked them what do you do with flour. They looked a bit blank and hemmed and hawed a bit until I gave them an answer, we’ll make bread. She nodded her head and agreed; bread was a good thing to make with this flour. 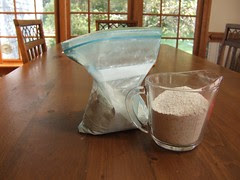 Update:
It was a very tasty loaf, just a bit crumbly. 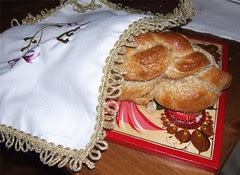 countyfairchallah
Originally uploaded by Teckelcar. The challah was rustic in appearance with a nice whole wheat flavor. Next time I'll go half and half with my regular flour. That should give the dough a bit more elasticity, but preserving the whole wheat taste.
Posted by Sarah at 1:00 PM