Sometimes it’s Good Not to Have a Car

On Monday Larry dropped off his car to be inspected, find out why the airbag light keeps cutting out and to replace the timing belt. They were able to get everything done except the air bag. It needed one little part and they wouldn’t get it until Tuesday morning. Since Larry had to get to work in a timely fashion we decided that he would take the van. As a result I was sans car today.

I was able to cage a ride for Max, Rebecca and me to and from preschool. One of their classmates, Lydia, is a good friend and lives in our subdivision and her mom, Theresa, was more than happy to give us a ride. (Theresa can not just drop off Max and Rebecca because I have to sign in Max’s enzymes each day.) The plan was that we would get picked up after the boys got on the bus, the kids would be dropped off, then I would go to the library and we would meet up again around 1:00pm for pick-up time at the preschool (it’s a half day program). Theresa offered to drive me home, but I didn’t want to inconvenience her any further. The preschool is located within walking distance to all sorts of businesses, county offices and the library. I could easily amuse myself for four hours.

It all worked out. The only hitch was that forgot the library doesn’t open until 10:00 am. I was disappointed while Theresa was unnerved by the prison work crew doing the landscaping. We decided that Starbucks was the place to go.

I lasted about 2 minutes there. I don’t drink coffee and the place was jammed. Instead I wandered around the county government complex. I took pictures of the old jail. 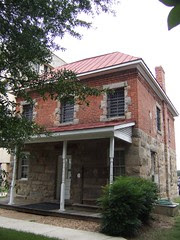 I checked out the progress on the new jail.

newjail
Originally uploaded by Teckelcar. It’s big, it’s imposing and I hope I never have to go near there.

I discovered that the county has a huge petrified tree trunk that was fished out of the James River.

There are three buildings dedicated to local county history. They are a museum, a library and a historical plantation that are all within walking distance. Sadly all were closed for renovations for the upcoming 400 year anniversary next year.

The fine folks at the parks and recreation building are very friendly and helpful.

It was very pleasant rambling around. I was even able to read a book while at the library.

When it was almost time to meet my ride and get the kids I walked over to the local hardware store to get paint chips for the bathroom.

It was a nice slow paced way to spend my morning.
Posted by Sarah at 11:42 PM